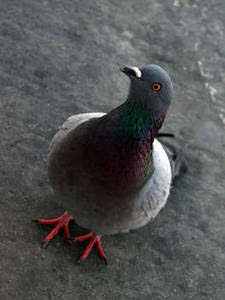 Before I start this post, I would like to recommend a couple of really good books relating to this subject. If you have even a marginal interest in pigeons, please check these books out.
"Pigeons: The fascinating saga of the world's most revered and reviled bird" by Andrew D. Bleckman
"Super Dove' by Courtney Humphries
"Extraordinary Pigeons" by Stephen Green-Armytage

Every morning I run on Salisbury beach. I pass a block of pizza shops, arcades and t-shirt shops. There in the tucked in recesses of these building lives a colony of pigeons. Some of the pizza shops are not happy with the pigeon hanging around and perching on their signs. They have installed long needle like spikes up there so the pigeons can't perch there. One pizza shop, however, has a perfect alcove for the pigeons to perch and nest.
One day I looked up and saw what looked to be a nest.The pigeons seem have been busying themselves back and forth up there early morning and at dusk. Everyday I would take a peek to see if there was any activity within the nest. Sure enough, two little heads poked up. I saw two other pigeons hunker down in the nest feeding the babies by taking turns.This went on for about 4 weeks. The babies looked almost full grown.
At this stage the babies are called "Squabs". They are very plump and almost ready to fledge. Englishmen and Frenchmen historically harvest and eat these squabs . They are considered a delicacy. This is the bird equivalent of veal. These are babies who have never even had their first flight. They are snatched from their parents and are used as food. I think this is horrible.
One baby in particular in this nest I noticed had a white head and body with a black stripe around his neck making him look like he had a beard. We called him "Craow Dum" (which means 'black beard" in Thai) After about 6-8 weeks he was fledged and full grown. He would take off with the other pigeons doing what pigeons do during the day and then come back at dusk to his little protective alcove.
There were other pigeons in the group that were also distinguishable. One had a grey body and a white head. The head had distinct black markings that made him look like a skeleton head. We called him "Galok" (which means "skeleton head")
There was another one that was all white so we just called him "Whitey Bulger". One pigeon who did not have any distinguishable markings. He was just a dark grey bird but his actions drew him a name. He would make a pest of himself with what I assume were female pigeons. He would puff his chest out, fan his tail out and twirl around in a circle in this hilarious looking dance.
We called him "Busta Move"
I started to feed them every morning. I made sure I got there at the crack of dawn to feed them when no one was around. Many people just do not like pigeons.
I personally find them interesting in their own pigeon world interaction and I find them very beautiful because of the diversity of color patterns. I've been watching this group of pigeons for about two years.
They live a rather harsh life and I am amazed at how resilient and determined in survival they are.
*more on them later
Posted by saint atlantis at 5:51 AM