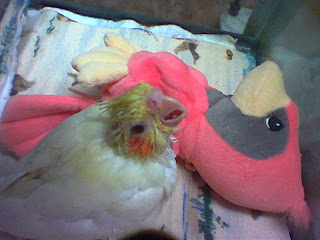 It feels like spring is in the air. We've been fortunate at the coast line not to have had a snowy winter like other parts of the country. Regardless, you can tell you are a "New Englander" when the temps reach 40F and everyone is wearing shorts and t-shirts. You can tell you are a "Hampton Beacher" when temps reach 50F and you have your bathing suit on. The beaches were packed as if it was the middle of July. Everyone emerges like sleepy groundhogs in anticipation of spring.
My birds definitely feel the signs of spring.
Linus (my male cockatiel) makes a total pest of himself with his aging bride "Lucille". She is much older than Linus and I think she is going through birdy menopause. She sleeps more often and prefers to explore the other cages without him pestering her. Linus, on the other hand, is a randy young male. He sings his little raucous mating tune more than ever since the daylight is changing. He has gotten pecked on the head more than once for his persistant advances and his bossy behavior. During the day, I have to separate them because of his constaint badgering. He is OK with it so long as he can see her. If she is out of his sight for even a second he has a panic attack.
They are a mated pair. Linus will flirt with visiting female cockatiels but he remains faithful to Lucille. Lucille will sneak in "Louie's' cage (he is a male princess of wales parakeet). Louie enjoys her company and will serenade her. Linus will have an absolute fit pacing back and forth on his cage.
In 2005, Linus and Lucille had two successful clutches of babies. In Lucille's first clutch, she laid 6 eggs but only one egg hatched. This baby was named "Fresh baby". She hatched on February 19th 2005.
Both parents were very diligent in their job sharing chore of feeding the baby and guarding the nestbox. After 3 weeks, when the baby's feathers started to emerge things started to change.
Fresh Baby was a lutino. A lutino is an all yellow cockatiel usually with red eyes. They are basically albinos but more of a yellow lutin color. Linus and Lucille were normal greys. Both Linus and Lucille felt this" yellow baby" was a defect and started to pluck at her feathers and tear at her rather than to feed her.
I recognized the signs of this possible infanticide and had to intervene.
They were no longer interested in caring for this baby and were already starting exhibit nesting behavior to ready themselves for a new, more worthy, clutch.
As you might guess, panic set in. Baby cockatiels are not full weaned til they are between 8-10 weeks old. I got on the internet in search of how to hand feed baby cockatiels and found phone numbers to call experienced breeders about what to do.
I put her in an aquarium with a heating pad (not too hot) wrapped in a little blanket and a stuffed toy for her to cuddle with. Depending on the age and weight of baby depended on amount of food given and how many times a day. The food was special formula mix called Exact formula by Kaytee. The food had to be a certain temp (105F measured with a candy thermometer) and the right consistency (not too watery or not lumpy- which would cause serious problems with digestion). It was tricky as well trying to manipulate a syringe. You had to be slow and steady entering on the right side of the mouth pointing to the left side of the mouth. This was extremely important to do this or else the baby could suffocate.
This was extremely stressful in the beginning because so many things could go wrong plus at this young age feedings were done multiple times a day (as well as night). You had to check their crop to make sure it was empty and emptying at the correct rate. The crop is a sac that hold their food in their esophagus which then empties into their digestive track. Her little head would bob enthusiastically once she got the swing of getting tasty warm food. Her little face would be a mess and I would promptly have to wash her face after each feedings so the food wouldn't harden on her feathers. At the times when I wasn't feeding her I would put her on my warm stomache and groom any debris off her feathers. As she got older the amount of food increased but the frequency of feedings declined.
When she was about 6 weeks she started getting a little fussy. It was getting hard to feed her. I was worried something was wrong but as I learned this was sort of normal for a baby to fuss because she was ready to fledge (fly). She would flap her little wings and try to take off. I had to be very careful with this so she wouldn't crash into something.
This fledgling period went on for about two weeks. She could fly and land safely. I set up a little perch in her aquarium so she would learn how to perch normally. I started to introduce her to solid foods like cheerios and millets sprigs. She still had to be hand fed up to 10 weeks but with less frequency.
Fresh Baby was my 'first' successful baby.
Posted by saint atlantis at 6:14 AM