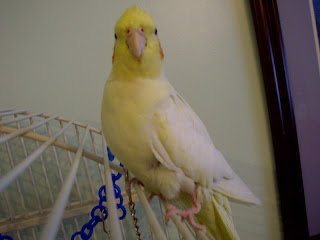 "Button" was my first cockatiel. She hatched on May 16 2002. I brought her home when she about 8 weeks old. She was a very large lutino (yellow) female. She was actually larger than her siblings thinking that she might be older than them, but she wasn't. She was just a big baby.
In retrospect, I should have waited a week or two later to pick her up at the shop. When I got her home, assuming she was fully weaned, she made these noises like a raptor. I had no idea why she was making these noises. When I called the shop they said, 'She'll get over it". She had no problem eating on her own but she was being forced weaned.
"Dexter", my little white budgie, must of known "Button" was still just a baby. When I introduced Button to Whook and Dexter, Dexter perched next to Button and started grooming her. It was the cutest thing I ever saw.
Button was abnormally large. She was almost the size of a small chicken. When I looked at other (lutino) cockatiels featured in a bird show I was amazed at how much bigger Button was in comparison. I do not know if this was indicative of problems Button would later have when she reached 6 months old or if taking her home at 8 weeks could have lead to her problems later.
Who knows.
I can only speculate.
November of 2002, we went on vacation and boarded Button at a bird boarder. I missed her terribly. Shortly after we came back, Button started picking and tearing at her feathers.
I immediately took her to the vet for a check up.
The tests came back inconclusive but she was treated for giardiasis. Lutino cockatiels are prone to giardiasis. Giardia lamblia is a protozoan parasite that causes the bird to itch and pick. The tests, however, are inconclusive because the giardia cysts are shed periodically so it is hard to catch the cysts on the gram stains on the first test. Regardless, she was treated with metriozidole for 14 days. Unfortunately, she still picked.
So I took her Angel memorial animal hospital for a second opinion. The vet there thought it could be hormones so she was put on luprin to stop egg production. She still picked.
I took her at least six other different vets for their thoughts, including a homeopathic vet. She still picked.
I even took her to a pet psychic for answers!
Button's liver was starting to be compromised due to either all the meds or just because she was a lutino. Lutinos tend to get sick more easily than normal greys. Button was prone to yeast infections on a regular basis.
All of this was extremely stressful to me and Button. I tried to make sure she was on a healthy balanced diet, that she had soothing baths and some sunlight (at least in the summer)
She is bald under her wings and "bikini" area. She tends to get feather cysts too.
This poor little bird despite all of this is sweet loving bird. Besides, Whook, she is the only one that responds to her name when you call her. She loves to play basketball with little plastic jingle balls. I haven't given up on trying to find a "cure" for her feather issues despite the 2 inch thick packet of past medical records I've accumulated through out the years for her.
I've attended quite a few "parrot' conferences in New Hampshire, New York and Texas picking the brains of well known avain vets , behaviorists and nutritionists trying to find the magic bullet to hopefully 'cure' Button.
What I found out there is no magic bullet.
Feather picking is a very complex frustrating problem for both vets and bird owners.
Meanwhile in my ongoing search for answers, Button gets lots of attention with the best care I can provide for her.
Posted by saint atlantis at 12:05 PM