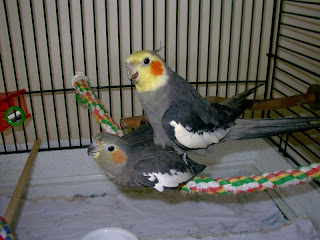 The other day, my sister called me on the phone.
It seems like every time I get on the phone with her the show begins. I could barely hear her speak. All I could hear was her two kids whining, crying and carrying on like brats.
As I was about to scream, "how can you stand it!?"
She bellowed to me, "Oh my God! How can you stand all that racket!?!"
I thought to myself, "huh?!?"
"The birds! The birds! How can you stand all that noise!?!" She screeched.
As I turned looking over my shoulder, I saw two of my budgies, who I call appropriately enough,"the gangs of New York", on top of one of the cockatiel's cage provoking and teasing, "Linus," my male cockatiel. He was screaming at the top of his lungs for them to promptly move away. Meanwhile, my princess of wales parakeet ,"Louie", was all in a uproar over this protesting by honking loudly. "Louie's" honking provoked the other tiels to join in on the chorus.
I remember my sister saying to me some time ago that in order to survive kids you need a sense of humor.
The same goes for having and caring for animals.
It seems that every time I have company (which isn't very often) there mysteriously appears a "mystery poop" stuck on e.g. the kitchen cabinets, the living room wall, the couch or on your hand no matter how thoroughly you scour your home of detritus prior to the visitation. The poop just magically appears just in view of your company especially when you brag on how much a neat-nik you are.
When dealing with animals, your sense of humor ends up falling into the catagory of 'bathroom" humor.
Last Halloween, one of my dog walking clients was concerned that one of her dogs got into the Halloween candy by mistake. She asked me to keep an eye on "Riley" because she might have eaten some chocolate. Chocolate can be poisonous for dogs. So far, everything seemed normal during the walk She was as active as ever. When she stopped to do" her business" she dropped a fully intact still-in-the-wrapper milky way candy bar.
"Riley's" pal ,"KD", a little poodle, had this issue of eating anything that was within reach. One day the owner asked me if I seen a box of ear plugs on the counter. I didn't, but I saw a chewed up empty box on the floor. I took her for her usual walk not giving it much thought. When she stopped to 'do her business" I reached in my pocket for a handy "poop bag". My eyes almost bugged out of my head when she looked as if she was pooping out a giant pink nerf ball. Three more popped out.
It appeared that she indeed ate the ear plugs and they expanded 10 times their normal size when they finally made their way out. Not only did she eat the ear plugs but the plastic label as well which appropriately came out wrapped around a turd stating: "made in China".
My cousin had the same sort issues with her dogs swallowing all kinds of things. One incident involved a missing sock. You can probably guess where she found the missing sock.
Let's put it this way, at first she thought it was a tail.
My budgie "Whook' can talk. This little bird had a knack of saying things at the most appropriate (or inappropriate) times depending on how you looked at things. One day, we had a problem with the sewer backing up into the sink due to a branch clogging the lines. I immediately called the 'roto-rooter" guys to come and fix it. The house stunk to high heaven .When the "roto-rooter" guy came in the kitchen to explain to me what the problem was I could see "Whook" bobbing his head rearing to go.
As clear as a bell, Whook screamed out, "JESUS CHRIST! JESSSSUS CHRIIIST! YOU STINK! OH My GOD! You stink! STINK STINK STINK! YOOOU STINK!"
The guy whirled around to see who was insulting him and just saw "Whook" just sitting there.
"Whook" also seems to enjoy doing "teenage boy" things to his soft perch while singing and chatting merrily, "oh I'm a biscuit! Oh I'm a biscuuuit!" especially when I have company. It's embarrassing when my company asks me what the bird is doing.
I generally try to ignore it.
Oh yeah, never a dull moment with pets!
Posted by saint atlantis at 9:18 AM