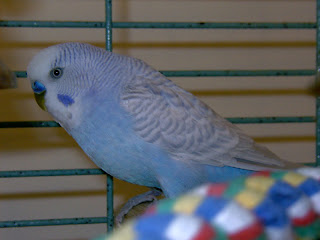 Whook is our first bird. He is pale blue male budgie. I got him in 2001 at a bird shop in Amherst, NH.
My biker buddies, Mel & Millie, had a couple of birds which influenced me on my downhill spiral bird obsession.
Like with everything I do when I am interested in something I research it inexhaustibly. I read everything I could possibly get my hands on about budgies and their care. One book in particular I found helpful, "The Complete Idiot's guide to Bird care & training" by Jacqueline ONeil. I hate the title, but it is a very good starter book.
Whook was my only bird at the time so all my focus was on caring and training him. It took about a month for him to step up on my finger. The turning point for him to trust me was on one stormy day in the summer. It was thundering and lightening. I took him out and wrapped my hands around him holding him close. I kept saying, "Biscuit Whook" "naughty bird"' pretty bird". He must have realized he was safe with me because once I opened my hands he did not fly away in panic but stayed cuddled up to me.
He started to talk when after he spent a week at a friends house while we went on vacation. He didn't say things "Biscuit Whook" or "naughty bird" like I had taught him.The first thing that came out of his mouth was, "oh stop it!" and "shut up!"
After that he said everything and everything. He loved the 'jailhouse" song from the "O Brother" folk album. He could whistle the entire tune and sing with his own lyrics. "YOoour a Biscuit WhoOOok now". It was hilarious.
Whook has had a lot of adventures, alot of them, not so good. He seemed to like to fly into the iguanas cage, sit on top of them and "groom" them. The iguanas, at first, didn't seem to mind.
One day, "Stimpy" did mind.
I heard this ungodly scream. Whook was in Stimpy's mouth. Blood was everywhere. I was in a total panic and called the emergency 24 hour vet in Nashua, NH. Reptiles saliva is fairly toxic I really didn't think Whook was going to survive. It turned out that Stimpy crunched a blood feather. Once the blood feather was removed , and Whook was on antibotics, he was OK.
A second big adventure for Whook was April 3rd of 2002. My husband came home from work for lunch and Whook was flying around the house. When he opened the door Whook flew out. I looked on with horror as I saw Whook speed off in a frenzy through the neighbor's pine trees. Hawks were circling overhead and it had just snowed. I felt Whook was a goner.
The first thing I did was, of course, run after him but he flew out of sight. I called the Burlington animal control officer in the town we lived. Both my husband and I were grief stricken. We combed the neighborhood yelling "Whook! Biscuit Whook" and singing the Jailhouse song as loud as we could. Our neighbors must have thought we were nuts until we told them what happened and to keep a lookout for a blue parakeet. By day four after no sightings, we figured he was gone.
I couldn't stand not having a bird so we decided to get another bird. It wasn't as if we were replacing Whook it was just that we enjoyed having a bird so much in our lives. We took a ride all the way down to Easton, MA on the south shore to find a hand raised parakeet.
When we walked in the door with little "Dexter" the phone rang.
It was animal control.
He found Whook.
Whook flew about a mile and half down the street and landed on a guy's head while he was raking the leaves. Whook proclaimed , " you stink! And you're naughty!" The guy figured he must have been somebody's pet. We were overjoyed. I felt I had just won the lottery. I gave the gentleman who found Whook a family pack of movie tixs as a reward. He was just as happy that Whook found his way back home.
Whook, however, wasn't so happy seeing another bird in his cage.
Matter of fact, he was down right pissed.
I had immediately go out and buy another cage since Whook was used to his own cage.
Whook, later, fell in love with Dexter. When Dexter died two years later of a kidney tumor Whook fell into a depression. He started getting sick alot with bacterial infections. I changed his diet, used bottled water and added milk thistle to boost his liver function. He started getting better.
We still have Whook. He is still going strong.We sometimes call him the "Mayor' because he acts like the ambassador for all my birds. He speaks bilingual: birdy speak and English.
Still every once in awhile he will say something funny (or obscene) I swear to get a rise from us.
And he knows he is the king!
Posted by saint atlantis at 5:40 AM