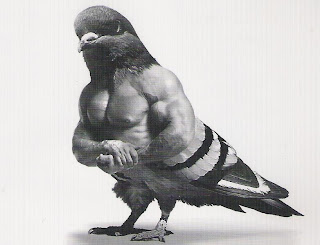 Everyday I go down to the beach and feed my group of pigeons even if when I feel too sick to go for a run.
They wait for me.
These pigeons do not have an easy life despite of residing at an area that has pizza, french fries and fried dough.
They face getting run over by cars, rocks thrown at them from nasty punks, treacherous weather, cats, hawks and discarded fishing equipment.
One day, I noticed a couple of the pigeons had monofiliment fishing line wrapped around their feet. It was the summertime, the fishermen line the beach shore early morning in pursuit of striper bass. Many of their lines and hooks get "lost" or discarded in the surf creating not only a hazard for people walking the beach barefoot but for the local wildlife. I've seen these lines wrapped around seagulls bodies as well as bits of lines hanging out of their mouths.
When I saw the pigeons with the lines wrapped around their feet I was hoping they could shake it off because they certainly wouldn't let me near them in order for me to remove it.
One pigeon in particular had a piece wrapped tightly around it's foot. The foot was infected and swollen. It looked like a baseball mitt. I called him "Big Foot". He managed to still come around despite his disability. He could barely walk never mind to perch. He hung around for about a year then disappeared.
Shortly later I saw "Craow Dum", my baby pigeon that I watched grow up with a piece wrapped around his foot. He was only a year old. I felt sorry for him. He later shook the line off but it caused permanent damage to his feet. There are pigeons that look similar to him but I identify him with his deformed feet. I still see him everyday.
I see hawks all the time. When the pigeons don't come down for their morning feast I can safely assume a hawk is nearby. I did see a sharp shin hawk perched on a coke machine with a hapless pigeon in it's grasp. It was unnerving. One day, "Whitey' the white pigeon, disappeared.
Certain pigeons come and go. When I don't see them in the morning I assume the worse. But then the next day they would all show up.
When I would go to the beach in the afternoon. I noticed a different group of pigeons identified by their markings. I call this group the "beach pizza pigeons". One of these afternoon 'beach pizza pigeons" is a distinct reddish brown pigeon. I would only see him when I took my bike down to the beach mid afternoon.
Word must have gotten out to some of these pigeons because I started to notice once in a while this brown pigeon would show up in the morning if I came a bit later in the morning to feed them. I named him, "Brownie".
If you really look at these birds you would appreciate how beautiful they are. Their necks are a purplish greenish iridescent color. They are amusing how they interact with one another.
"Busta Move", the pigeon who dances and flirts with the female pigeon, is a riot to watch.
He would bob his head, puff his chest out and spin around. He must think of himself as a major "player". If his dance moves failed to attract a female, he would be so bold as to just climb onto a reluctant female only to get pecked and pushed off. It must not be any different from what goes on at a singles bar.
Ahhhh, such is the life of a pigeon!

* photo credit: "Super Dove" by Courtney Humphries
Posted by saint atlantis at 5:49 AM