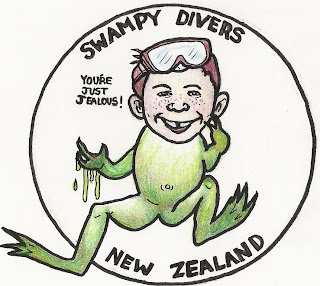 It is one of those days I have no energy. I feel like I'm wearing cements shoes and my head is swollen to the size of Texas.
Yup, a migraine is just waiting around the corner to grab me. Luckily, I have fairly "easy' day just having to walk my 'regular" dog walking customers and clean only seven bird cages.
I am planning on plunking my butt down at about 4:30pm to watch "Judge Judy" and to relax with my birds.
There are few commercials on TV that catch my eye, either I find them amusing or really irritating.
I find the McDonald's fillet-o-fish sandwich commercial with Freddy the singing fish pretty funny. Of course, I do not eat fish. I'm a vegetarian. I do, however, crack up with these two guys bopping to the "give me that fillet-o-fish..." song .They look like the kind of guys that would be featured on the show "My name is Earl".
The other commercial that totally cracks me up is the the "Foreyes" commercial. It is the one with the grandmother trying on her new glasses and her cranky ol' husband whines "can we go home now?". When she puts on her new glasses she sees a hunk instead and purrs ,"sure!"
The commercial that I simply hate is the nissan chow mein commercial with the little creepy Confucius guy talking about 'noodle enlightenment". I think this commercial is so offensive to asians by using this lame stereotypical character. Can you imagine if they pulled this crap by using a racially age old cartoon stereotype instead? Shit would surely hit the fan.
Another commercial that I found completely awful was a radio commercial I heard about ten years ago for Valentine's day.
It went like this, " get her what she really wants for valentine's day.... VIAGRA!"
I couldn't believe it.
Can you imagine all the self absorbed clueless old scroggies that actually think and believe that women want a naked old fart for valentines' day instead of flowers and candy?
Can you just picture it?
Give me a %&*ing break!!!
That commercial only ran for a week and I never heard it again. I bet alot of women called to complain as well as old guys protesting, "Hey! It wasn't what she wanted for valentine's day. She wanted candy!" DUH
MAD magazine used have a comic strip in their magazine by comic favorite Don Martin that would take commercials and satire it in a strip called "scenes we'd like to see".
One commercial in particular I would like to make the necessary adjustments is the one for "Hair Cuttery". It shows this impeccibly groomed good looking guy skipping down the street that looks like the Back Bay with five dogs on leashes. It makes me laugh because it is so unrealistic. Especially the fact that all the dogs are well behaved and going in the same direction with the happy hunk AND he is not carrying any poop bags!
In reality, his sweater would have it's sleeves partial chewed and stretched out. Paw prints and dog hairs all over his sweater and pants. And definitely, at least one of his shoes would have poop squished and stuck on it. Of course, he would (or should) be carrying a couple of full swinging bags of shit. The dogs themselves would all be wanting to go in different directions. One would be stopping to poop, while one of them all of a sudden just has to lunge for that squirrel as well as another one pulling in a different direction dying to sniff that rotten banana on the street. And of course, what do you think what would happen when another dog walker comes in view with a yappy bichon in tow? There is no way you can walk five dogs at once. Walking three well behaved socialized small dogs is tough enough never mind FIVE!
Yup, that would be a scene I'd like to see!
Posted by saint atlantis at 6:36 AM