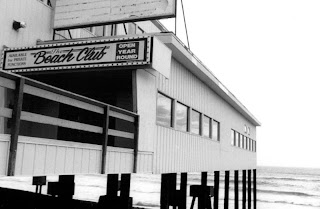 I went for my usual run on the beach this morning greeted by the welcome committee of the "morning" pigeons.
It's funny. They recognize the car.
You can see them all turning their heads as the car is pulling into park. For those who found Alfred Hitchcock's movie "the Birds" a fright you might get freaked out by my pied piper effect I have on these pigeons. As I step out of the car you can see about 20 pigeons descend upon me. They all know I have a can of millet seed for them for breakfast.
"Craow Dum", "Brownie" and "Busta Move" were present along with a mix of other grey pigeons. "Galok" has been missing since the storm. Hopefully he is venturing off somewhere else. A new pigeon who I named, "Patches Kennedy', has appeared. "Patches" as you might have guessed is identified by a spattering of patches.
That storm had a huge effect on the shore line. I can see how much the sand and surf has receded at such a dramatic level. The surf side beach club which is posted right on the beach has lost about 7 feet of sand exposing pilings holding the deck and foundation up.
The old grandeous hotel, Ocean Echo, that burned down in the early 1900's has it's dock pilings exposed.The hull ribs of wreck of the Jennie M Carter that ran aground in 1894 is also now exposed. The treasure seekers with their metal detectors were busy like seagulls in search of finding any uncovered treats . A few years ago when we had the Patriot's day storm one treasure hunter found a coin dated from the mid 1800's.
I wondered where the pigeons find refuge during the storm. When the wind is blowing from the north they usually huddle on surf side roof facing south. I've seen Craow Dum hunkered down under the pizza sign on top of the fan cover tucked in a corner. He is pretty much protected from any weather conditions in this spot. I've looked around to see where they could possibly go. Dilapidated air conditioners hanging from some of the old abandoned shops as well as rotted gutters and busted light fixtures seem to provide homes for some of them.
At some point these old buildings will be taken down and replaced by condos and la de da shops. I wonder what will happen to the pigeons?
Posted by saint atlantis at 6:11 AM