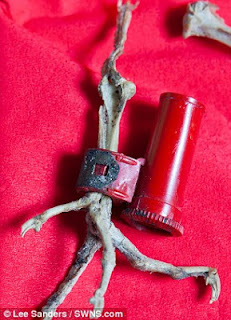 I came across an interesting article about a guy who found a pigeon skeleton in his chimney with a note attached to his leg.Apparently this poor bird was a WWII carrier pigeon off to deliver a message to a Sergeant W Scott but never made it.I find it amazing on what I have read about how many pigeons were used and how many (human) lives depended on these brave dependable birds.
Despite of all my poor pigeon has been through with his ailments he/she still follows me around and seeks out my company. I know people roll their eyes at me thinking ,"oh for God's sake..it is just a damn pigeon',when I complain how worried I am about Craow Dum's health issues.
Seriously, I've never met a creature so loyal and so grateful.
My husband has been scanning the internet for my Christmas gift. He's not good at 'surprises" and tells me how he looks for pigeon related items for me. In his search, he told me about this Japanese DVD about a ghost pigeon. It is about a woman found a baby pigeon in a gutter after many people walked right by ignoring his cries.the pigeon was her loyal companion in this life and the next.
My husband looks at everything with "logic" and :"practicality" since he is an engineer. He also believes some things can not be explained
He believes like this person in the movie I am also the pigeon saint.
Ah yes, remember I am the patron saint of birds, fish and reptiles.
He would not have stopped and picked up the pigeon in the sewer gutter. He also found it spooky how I found a set of rosary beads UW in Bonaire.
Whook our elderly parakeet wasn't doing too well this week. I thought for sure he was a goner on wednesday. I set up a bird angel by the window. I cleaned his cage nicely, gave him special rice and broccoli and covered him for some peace. Oddly he seemed to have perked up. He is still not 100% well but he is still eating and squawking at us.
And I don't care if anyone thinks I'm nutty.....
Posted by saint atlantis at 12:18 PM