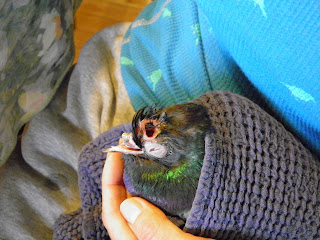 I thought everything would be solved at this point with Craow Dum after that nodule came off .
I've been cleaning the area where the nodule came off as well continuing on with the medicine. However, I noticed his/her eyes is still bulging and he/she still has a snotty nose.The feathers fluffed up now hide the hole. I pulled the feathers away and noticed fluid was coming out. I cleaned it up and looked inside the hole with a flashlight to see more debris, goop and ingrown feathers.I felt like I was playing the game "operation" carefully removing debris trying not to touch the rim.(Remember that game where you take tweezers to remove "the funny bone" careful not to ring the buzzer?) I was concerned about doing anything invasive since  my implements aren't exactly 'sterile".
As I held the flashlight in mouth inspecting the gap on his/her head for more debris as I painstakenly removed bits. I saw inside where the wall near the bulging eye was a white plaque similar to a canker sore humans get in their mouth. I thought I could scrape it off but instead it bled. I dabbed it with a Q-tip to stop the bleeding.I felt sick thinking I could cause more harm than good.
I've been corresponding with folks all over the world on the pigeon chat line I link onto. Craow Dum has a fan club .I've even had a few people offering to help with his medical bills! (I thanked them all and respectfully declined their generous offers) It's been really amazing with all the imput I've been getting.
I sent an email to my vet to keep her updated on the ongoing saga for her own interests since this is a rather a'special case".
As I type all of this, that silly little pigeon followed me upstairs and is sitting next to me completely unfazed by his/her hole in the head and everything else.
Posted by saint atlantis at 8:17 AM