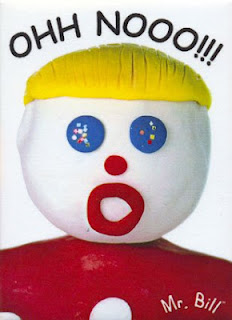 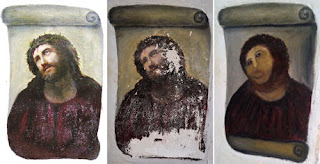 This was one of those 'internet stories" I just had to read about involving an elderly woman who took it upon herself to "restore" an 19th century religious iconic painting "Ecce Homo" at Borjanos in Spain.
OMG I thought I was going to pee my pants laughing.
My long time pal and fellow artist has an uncle who did restorative painting for a living. I remember "Uncle Ernie" way back when I was a mere brat of six years old. Restorative work is difficult, precise and meticulous in so much as replicating the exact paint and materials used in the original.It is done in pain staking  detail.
Of course when I saw this internet article I had to email it to my friend.
The person who "attempted' "to fix" the painting looked like she used poster paint (like the kind kids use in finger painting)
The end result no longer looks like Jesus but more like Mr. Bill.
My friend was aghasted and like myself, we both found this to be a bit sacrilegious but at the same time, hilarious.

Posted by saint atlantis at 6:17 AM