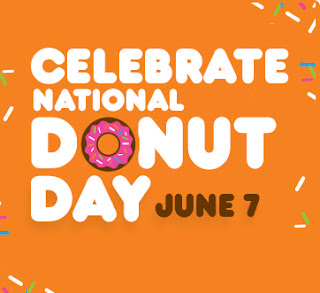 OK ladies and gerbils, this friday is National donut day.
Buy a beverage and get a free donut at dunkin donuts!.  :-P
You ever notice how shitty ol' starbucks never has any freebies or specials?
It is because they SUCK!.
(And their coffee taste like cigarettes.)
Regardless, I will not indulge in the donut give-a-away..
This is only a "public service announcement" (wink!)
I haven't had a donut in now three years.
Dunkin's just came up with a new breakfast sandwich  instead of using a bread or a bagel it is a donut cut in half with the sandwich fixings inside. It is probably a billion calories but I bet it taste like heaven.
Do you ever watch those cooking competition shows on TV?
There is one show with a bake-off starring Jeff Foxworthy  (the "you know you're a red-neck" comedian. I'm not sure why he is a judge in a baking show though(!?!)) Anyways, all you see is these beautiful creations of cookies, cup-cakes and pies.
It is kind of like a "playboy channel" for people with a "sweet tooth".
My Mother could "kick ass" on that show with her banana cream pie and apple pie. I personally think my scones are the best. They are low fat/low sugar with healthy morning kick start ingredient such as:oats, whole wheat, dates, walnuts. However, a lot of  people may not like them since they lack the 'fun' ingredients.
Dive buddy "Andy' sometimes brings these polish donuts onboard the dive boat as a treat for those to indulge in.
I've resisted the temptation, so far.
However
I think I actually caught one of those fluffy donuts peeking of the bag and winking at me.
What a naughty little thing!

Posted by saint atlantis at 5:51 AM