crazy days in the bird house 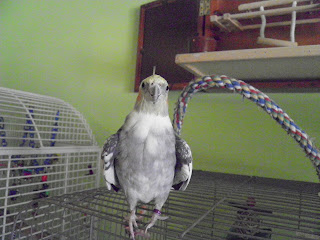 *Here is a pic of Patches just "being Patches". As you can see he is full of himself. He is a typical male strutting his stuff.
Well, I've been getting a flood of calls right now that the summer is now here for potential vacationers looking to board their birds. The calls are  referrals from my vet's office. It's been crazy! A lot of my 'regulars' are here boarding right now. As with all my birds they all require heaps of attention and care. People do not realize how much goes into caring for birds. And no you don't just lock them in a cage all day and give them a bowl of seed.They get 'flight time", one-on-one 'talk time", fresh veggies and water changes (constantly) and of course, cleaning up poop and feather dust non-stop.
Charlie (the formerly "lost cockatiel") has been getting along wonderfully. He waits for his daily evening routine by poking his head out his cage looking for me. Many people would think he is "slow' in learning since it has taken over a month for him to get used to my hands. I think of the way I learn (say spanish) I take a few steps forward and a few steps backwards.I eventually get there but it takes awhile.So I understand him. I personally think he is doing great. He now makes "kissing" sounds. He actually "helps me" with my studying because he likes when I read out loud to him. He will give me an affirmative "PHEEEEWWP!" Patches finds this all so interesting as well and will climb in Charlie's cage to eat his food and tear the bottom cage lining newspaper for fun.
Croaw Dum follows me around and has to sit on my lap whenever I interact with the other birds.When I "disappeared" into the bathroom I found him on my computer "pressing' keys on the keypad. I have no idea what he did but he made copies of my files (!?)
Teddy the new ring-neck dove is quite comical but you have to keep an eye on him. You would think doves are 'gentle' but he goes after all the birds and attacks the dove-shaped napkin holder.He is a very hormonal dominant male. He has the attitude of a football player (except for he is a dove.) A female mourning dove visits the back deck every morning and he does his bowing, dancing and cooing.
I have a couple of potential new customers that will be interviewing me this weekend.It's kind of fun to see all kinds of new and different birds. thankfully, my birds don't seem to mind the company and thankfully my husband doesn't mind either, for the most part!
Posted by saint atlantis at 7:05 AM