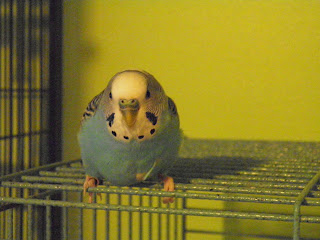 * Here is  photo I took of "Eric". He looks cute but he is a major trouble-maker.

Five months ago when I went to the dentist, I came back with not only a tooth-brush but a budgie (parakeet)

The hygienist had this budgie as a pet but since she had a new baby she  no longer had the time to give to the bird so he ended up with me.
I figured since Smitty had recently passed away Twillinger would be happy to have a"new friend".
Eric" had been caged up his whole life so this new found freedom of having out-of-cage time was new and exciting for him.
He grew stronger and unfortunately, more aggressive.
He started to beat up his chubby cage-mate Twillinger.
Eric also delighted in buzzing and challenging the male cockatiels as well. He would relentlessly get in both Linus and Patches faces aggravating the crap out of them. I would hear squabbling and screaming. They would chase him away but he would come right back at them.
I ended up having to take Twillinger to the vet. (oh yes, another expense) She had something going on. The vet suspected she had broken egg in her abdomen due to possibly Eric's aggressive advances. She is on medicine and rest by herself, but he seeks her out to bully her around. He even managed to squeeze through the bars of a cage to get at her. I heard her scream and promptly kicked him out.
Honestly you would never believe such a tiny little bird could be so much trouble!
Posted by saint atlantis at 6:43 AM