All of politics is a bloodsport 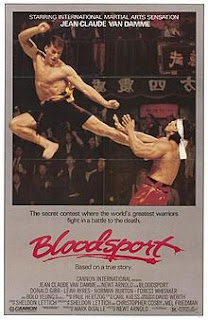 I can't help while watching political ads and debates envisioning a scene from the movie "Bloodsport' or from "the Hunger Games" where two strangers are thrown into a arena to fight each other to the death-mostly for public entertainment .
It's nasty.
And it's not mud slinging anymore it has stepped up to major shit slinging.
"Good Morning America" personality George Stephanopolis coined this phase 'all of politics is a blood sport".
And he ought to know.
He used to work for former governor (and former presidential contender) Micheal Dukakis. I can remember George as young guy following Governor Dukakis around like a Jack Russell when I interned at the State Houseas an aide in the 80's.
A few days ago, I turned on the vice presidential debate to watch.
I didn't know much about Paul Ryan or too much about Joe Biden either , except for a few of his verbal gaffes . Regardless, I wanted to keep an open mind to see what each of them had to say.
Oh my God.
I was cringing as I watched Joe Biden.
CRINGING.......
He reminded me of a creepy uncle or"family friend".
You know the kind when you are 13 years old that rubs your back and thinks it is "all in good fun" to snap your bra strap? Ick
Shiver...
He is a f*cking creep.
With that obnoxious condescending smirk and those snotty dismissive remarks.
And this jerk is a heart-beat from the presidency!?!?
I tried listening to what he said but all that came out of his mouth was  bullsh*t and and excuses.
I watch the Brown and Warren senate debates as well. Warren is definitely fighting against the wrong guy.
Scott Brown, in my opinion, is what a politician should be.
I label myself as a "Scott Brown Republican" because he is open minded and weighs issues out.
If Warren is so keen, as she pretends to be, for  "the little guy" then she should go up against Kerry instead.
OK folks, put on your rain-coats because it is only October and we have one more month of shit flinging.
Posted by saint atlantis at 8:23 AM