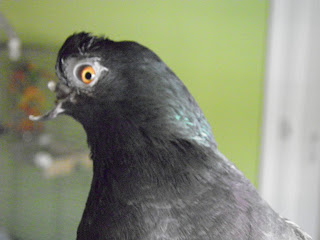 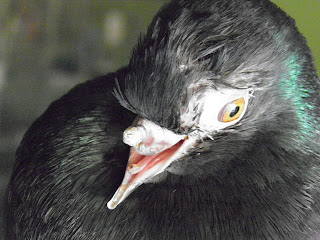 I wasn't sure if the title of this post should be titled the 'the wild pigeons of Salisbury beach" or "frankenpigeon". Either way, this post is about pigeons.
I took this (above) photo, yesterday, of Craow Dum.
I've notice that the rotten bone area of where his top beak should be has been protruding more. It feels mobile too. Yuck!. Around his eye is bulging more as well. He definitely has another granuloma emerging from his sinus again (as described in the "frankenpigeon" posts)  Booger has now been leaking out of a fistula on top of his head.Again, yucko!.
Oddly, I'm not terribly worried about it.
I sort of expected this to happen. I clean him twice a day (sometimes more) of snot and debris.
He will actually walk over to me for me to clean him when he is messy and sticky. It must be hard for him to breathe.  The good thing is that there is no inflammation that I can detect. He still eats, poops, turns the TV remote on at 4:00pm and carries on without a worry in the world.
When I cook dinner, he will sit on my husband sandals at the door in anticipation of his arrival home to "the flock".
I do expect that the granuloma will emerge, and pop out.Perhaps the bone tip will fall off too. At that point, the vet may be able to do something to clean the offending area out once those things push their way out.
I am hopeful.
It is just another part of the daily bird care routine.
In the meantime, I try to make my way down to the beach to feed the pigeons just about every day. I was worried about them during the blizzard because I couldn't get down here especially with all the snow and the massive flooding with the super high tide along the coastline.There seems to be a smaller population but still, the same gang still reside over the pizza shop.
Craow Dum is now perched on top of my chair while I type this. It's just one day at a time.
Posted by saint atlantis at 6:30 AM