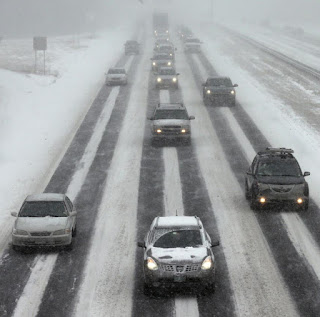 As I am typing this a major MF* snow storm is bonking us on the northeast coastline.
We could lose our power at any moment.
The entire town of Plymouth has already lost their power.
Oddly, I haven't seen any snow plows on the street this morning.
In past, during minor snow storms, there is usually a parade of plows up and down the street with the nonstop sounds of scraping metal.
Today, nothing,
Just the muffled hiss of the howling wind.
I looked outside the window this morning and my heart stopped.
Without my glasses it appeared to be this giant wave in the middle of the street.
It was in fact a HUGE snow drift!
One can never tell . There was a evacuation warning along the coast due to super high tides.
I was out at 11:00am yesterday when the snow just started to fall to get Mattie out for her walk and her afternoon poop. She kept lifting her paws up to lick them. I am wondering if the town pre-treated the roads first. I didn't keep her out long because God knows what she was munching off her paws. So long as she did her "business" outside I was satisfied with her abbreviated jaunt outdoors.
I tried out my "new' 4x4 since the roads were getting covered at a rapid pace . So far, so good.
The worse part is that the storm hadn't  even begun. The grocery stores I passed were completely packed with people.
I talked to a a couple of my pals yesterday on the phone as the snow was falling. Everyone told me what they stocked up on. All I can think of is back to the storm of 78' when the stores ran out of milk & bread for about a  week or so. I think that 'stock up' mentality since then has subliminally been ingrained in us  I,  for one, made sure I had a full tank of gas in my car, a couple of bags of broccoli, tea, soup, batteries for the flashlights and water.  If I lose electricity at least I can cook on the gas stove.
I gotta have my afternoon tea.
I had filled the outdoor bird feeders as well. This morning I saw a cluster of goldfinches hanging onto it for dear life. The big huge pine tree in the back (home to hundreds of goldfinches) was swinging back and forth.
It's now 9:00am saturday morning and it is still snowing and blowing like mad.
I'm not sure when will be a good time to attempt to clear the driveway because I'm not sure when it will stop snowing.
Oh boy this blizzard is a doozy.!
P.S. I'll take photos later on and post them on the next post*
Posted by saint atlantis at 6:30 AM