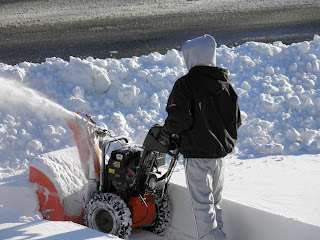 Oh what a handsome guy! 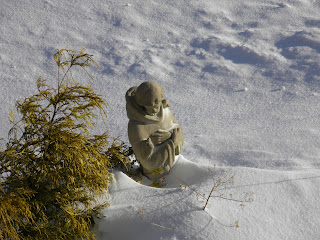 Poor Saint Francis poking his head out of a snowbank! 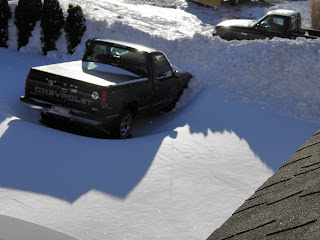 It's a mountain of snow mostly due to the drifts!

It took us about 3 1/2 hours to dig our way out of the snow. on sunday. My back and shoulders are sore. the goldfinches were happy campers that I cleared off the back deck to fill their feeders.I was up to almost my neck in snow venturing out to clear off the back deck.
On my back deck, which I think is a pretty accurate assessment of the snows depth since it is flat and even, was about 30 inches. I checked the heating vents and the direction of the wind had this area almost bare to the grass whereas the other side I had drifts that were well over my head.
*I took these above photos while I was up on the roof  shoveling off  a huge snow drift.
As I type right now, it is starting to snow.
Again.....
Oh crap.
The only good thing about the snow is that it is something easy to talk about.
It's a safe topic.
No politics, no religion  and no dicey off colour humor.
Well I gotta go and walk Mattie before it gets too dangerous to drive.
Posted by saint atlantis at 6:55 AM