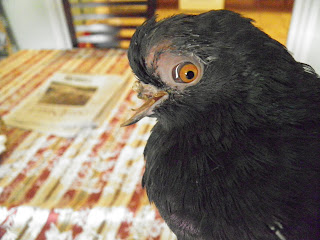 It appears the bone/sinus infection on poor Craow Dum's face is not slowing down despite my best efforts of keeping him clean and through multiple vet visits hoping to curtail the spread.
However, he behaves like nothing is wrong. He is busy pecking on the floor. He will peck at the remote control in living room at 4:00 for "Judge Judy" and settle down. He will hide under the computer table. He has a good appetite.
I, just feel, like I am just waiting for a bomb to explode as I look at his sinus/eye area.
On a last ditch effort I emailed Dr Walker, a racing pigeon vet, in Australia.
I have his book "The Flying vet". I sent him a photo and briefed him on Craow Dum's medical history. I also sent an email to my vet as well. I am now just waiting to hear from the both of them with any ideas, suggestions, or whatever.
According to "The Flying Vet", the book shows (successful before and after photos) of a pigeon who have had nodules removed from their sinus's. I do not know if this was a lucky one time success or if this case is even similar to Craow Dum's situation but, regardless, this (photo in the book of the successful surgery) is what prompted me to email Dr Walker for his thoughts on this case.
I know many people would just roll their eyes and say, "oh it's just a damn pigeon, fer God's sake".
I have not found a creature more loyal, smart and as funny as this pigeon.
He still jumps up on the couch, hip checks me to move over, looks up at me with his homely little face as if he is smiling.
He has never called me fat or stupid. He doesn't care who I vote for.He doesn't hold a grudge.He doesn't ramble on about stupid boring shit. He likes everything I put in his plate without a fuss.
He is just a nice simple sweet bird.
Maybe the vets will contact me back or maybe they won't. Maybe they will offer suggestions or maybe this is all that can be done.
This is my last life-line for this bird.
Posted by saint atlantis at 7:29 AM