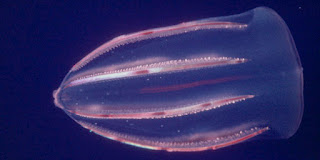 * Here is photo of a comb jellyfish I found on the internet.
I saw a bunch of them floating around as Pete dropped anchor.


Dive # 874 September 2 2012
It's funny how everything seems to shift gear once the calendar marks "September first".
It's dark at 5:30am now. The light feels like it has shifted at a different angle. Some of leaves are already changing color. The sunflowers are wilting. It is getting windier and the water is getting choppier.
Sigh...
And the drone of foot-ball games is now on the TV.
Gag.
So now I feel that I am grasping for the last remains of summer
I woke up with a pounding migraine. I was ready to cancel my day but I was hoping (and praying) the zomig would kick in fast so I could perhaps dive today.
We had a full boat today. The beaches and river was loaded with boats and vacationers getting that "last day of holiday" in.
We had Fred, Chris and Pete manning the boat. Jackie K, Sandy, Diane K, Richard B, George and his son  as customers. After fueling up at the fuel station we headed to "Naked man" beach.
I went in with Diane K. She wanted to stay right under the boat which was fine by me. We swam around looking under rocks for critters. I found a pair of crabs holding tight to each other. I am guessing they were mating.
The viz was (fairly)clear in some part and murky in others.The water temp fluctuated as well. I got a temp of 57F. It also was a bit windy top-side.
Dive#875 September 2 2012
Despite being cold after the first dive I opted to go in for a second dive.The cold water felt great on my head. It helps clear the fog of the zomig after-effects.We ended up at the left side of Folly cove for the second dive which was fine by me.
I was surprised to see so much bright green algae on the rocks. There were lots of cunners and pollock mulling around. The water felt a little warmer in the cove.
It was a pretty busy day today.
I got to say I'm pretty much in a bucket tonight.
Posted by saint atlantis at 5:37 PM