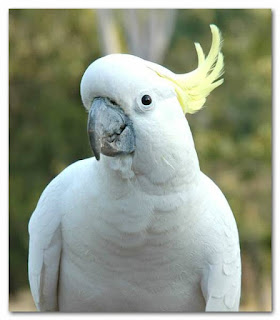 I couldn't help but comment on this case of the "potty mouth cockatoo".
A woman in Warwick Rhode Island has been cited with a noise violation over her swearing cockatoo.
From what I gather from the pending case, is that this woman lives next to her ex-husband with his girl-friend. One way of getting back at them is having the bird squawk "fu*&ing wh*re" repeatedly.
I got to tell you from experience, birds love saying the word "Fu*&;" It's easy to say and fun because they get a 'reaction" from it.
I do think these two people involved in this case are both  class A jerks.
Either party should move away from each other in order to halt this aggravation
The owner of the bird "Lynn" should keep her bird inside and retrain him to say 'fire truck' instead.
I do not have a good feeling about this case and think it will end badly for the cockatoo, not for the two idiots involved.
Yes, my budgie swears too but he mostly says,"very good indeed" and "I looove being a biscuit!"
I didn't 'train' him to swear. He just picked it up in passing because it is "expressive" .He will also laugh after he does it too. If I ignore the "fresh words" he will no longer say it because there's no benefit in it for him . If he says, "I love you!" I talk back to him, saying, "I love you too!" (this is positive re-enforcement to encouraging him to say it again) He usually will say it back again.
I think in this case, this "Lynn' has re-enforced the cockatoo to swear by saying "good bird!" afterwards, laughed (they love that) or perhaps gave him a treat after he said it.
Hopefully, both parties will "grow up', stop the nonsense and the bird will be spared any backlash.
Posted by saint atlantis at 6:35 AM