the troll in the box 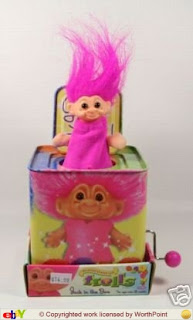 Every day, bit by bit, dementia keeps on taking chunks out of my father.
Through  comprehensive diagnostics it has been confirmed that not only he has Parkingson's  disease (along with a huge pile of other problems) but also white matter brain disease.
He is so small  and stiff now. You can barely recognize him. The worst part of his decline is the dementia..
It's so F*&^ing awful.
It is soooo predictably unpredicable.
He now has violent fits of random rage.My mother is still doing everything in her power to keep him at home rather than at a  nursing home. She has a nurse come in once a week for personal hygiene and to exercise his atrophied legs. I come over as well to keep an eye on him so my mother can go out to do errands. I joke with her saying "I better not see your suitcases packed along with a note saying "so long suckers!"!
Although, I can't say I wouldn't blame her.
His mood and his temperament has turned to sometimes just plain savage. Sadly,from what I've experienced when I worked in the nursing home that  this behavior is  typical of patients with dementia/white matter brain disease/ Alzheimer 's. You always have to stay on alert for not only the patient's safety but for your own.  .
I went over on saturday to hopefully diffuse his mood.
I brought over a 'troll in the box".
It broke" the mood", for at least  a little while.
He thought the troll was funny and I also talked to him about the latest case on "Judge Judy".
He calmed down for a while.
I could tell he fading again by the odd look in his eyes.
Out of the blue, he then started up  "demanding the keys to the truck". He "needed it" to do an errand.(!)
(*Mind you I took his car keys away from him two years ago)
I worry now that my presence triggers this now 'give me my truck obsession" with him.
It's like a record that continually keeps playing on a skip. It just doesn't stop.You try to calmly reason with him.and  he says, OK". And then an hour later he starts up again.
We are doing the best we can manage, at least for now.