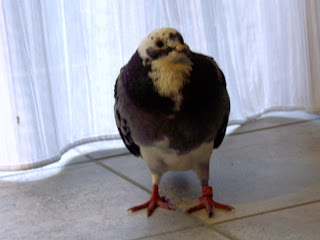 My husband and I were having lunch at a outdoor cafe late October in Dover, NH. I noticed this pigeon walking around under the tables. I thought it was a bit odd that a pigeon would be this bold and unafraid of people to get almost right next to your feet pecking around for food. Then I noticed this pigeon had a leg band on it. I asked the waitress if she knew about this pigeon. She said that one of the other waiters picked the bird up, got the info on the leg band and left a message with the owner to come and get his bird. She said he has been there hanging around for at least a week. I shrugged, we paid our bill and left.
I kept thinking about this poor pigeon. It was obviously not a wild pigeon but a pet of some sort.
Two weeks later, we took a drive back to that area. It was about 11:00 am and the restaurant had not open yet.It was pouring rain. Over in the corner I spotted that poor pigeon huddled under a curb shivering in the rain. I couldn't stand it. I picked him up, wrapped him in a towel and took him home.
I set up a cage for him with food and a perch. I would periodically let him walk around in the kitchen for a little exercise. He did not have any interest in flying which I thought was a bit odd since his leg band showed he was a racing pigeon.
I, myself, traced his leg band through a search on the internet and tried through email and telephone calls trying to reach his owner. His owner never replied back to me. I called the Dover animal control officer as well on what to do. The animal control officer was very nice and also a bit annoyed that another pigeon had been found and not claimed by it's owner. She found another racing pigeon located not far from the restaurant with a broken leg. Apparently there had been a big pigeon race in Biddeford, Maine. These pigeons were the losers and never made it back home. These birds are deemed as duds and the owners do not want them back so these domesticated birds are left in the wild to fend for themselves.
I took him to my vet for a check up and everything at the time checked out OK. I named him "Dover" since we found him in the town of Dover. I did think it was odd that the bird had no interest in flying. His wings seemed OK though. I started doing a little research on pigeons although there really isn't a whole lot out there on general pigeon care. I had to search under specialty racing pigeons to get info. A place called "Foy's pet supplies" located in Pennsylvannia seemed to have the most info on pigeons that I could find.
Two weeks later, the pigeon started to gasp. Something was going on with his respiratory system. In the info I found relating to racing pigeons stated that if a pigeon decides not to fly something is going on systemically. Systemically, in this case, was respiratory. I took him to the vet as soon as possible . I was also afraid he may be carrying something that could infect all my other birds.The vet prescribed an antifungal as well as antibotic. I was hoping I was early enough to stomp out any bugs that this bird may have had.
This poor creature started to get worse and was vomiting profusely. I took him to the vet for the last time. The vet suspected a mycoplasma that was highly contagious and usually fatal.
She thought it was best that he would be put down.
I was so angry that "Dover" the pigeon had to go through this. Since he lost his way in the race he was unwanted and disregarded like a worthless lottery ticket.
I did find after lengthy research on this old and dying hobby of pigeon racing how interesting and fascinating it was. I've never heard of anyone involved in this. As much as I felt saddness for this sick lost bird I found the role pigeons play in our society by opening this one little door of knowledge a wonder.
* more later on pigeons
Posted by saint atlantis at 12:16 PM