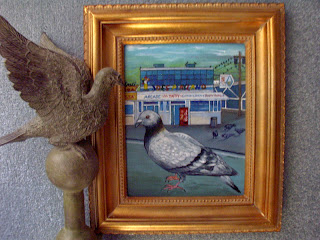 One of my favorite pastimes is to go bird watching. After working long & hard trying to figure out to outsmart the squirrels I finally invested in a couple of high end feeders with pole extensions. The squirrels try like mad to get to the feeders but they end up falling off.
My mother likes to bird watch also from her back porch. She had bought a couple of squirrel-a-whirls to deter the squirrels. These devices are attached to the feeders. When the squirrel gets up to the feeder to grab a tasty snack the squirrel-a-whirl is activated by the weight of the squirrel and starts to rotate. The device twirls the squirrel off like a super fast merry-go-round. These little boogers will hold on for dear life and spin around for a couple of good whirls. I think she is more amused by the squirrels going for a ride rather than protecting her feeders for the birds. My mother's house is near a wooded area and she gets a good variety of birds.
I get a million goldfinches.
It is like goldfinch central.
I have to refill the feeders twice a day. They like the black oil sunflower seeds and thistle. I also get nuthatches, black capped chickadees, downy woodpeckers, titmice and a variety of sparrows. A few weeks ago I had a different kind of visitor. The bird looked like a goldfinch but it had bright orange on it's back. I scanned my books and would study this little stranger. I had to closely observe this bird by examining it's beak. His beak was different from the goldfinch because it was black.
It turned out this bird was a pine grosbeak. We have had a steady NW wind. It is apparent this bird was blown in from Canada due to the winds. I never get tired of looking at the birds going about their business. I like looking at all kinds of species of birds.
I even like watching pigeons.
If you have ever really noticed pigeons they are really quite beautiful as well as funny.
Woody Allen described them as "rats with wings" but this is coming from a perv who is bonking his adopted step daughter. This man truly needs a moral compass.
I can say this and judge his moral character because, after all, I am the patron saint of birds.
Anyways...
I really started to notice the pigeons when I took a trip out to San Francisco to see the wild parrots of Telegraph hill. The pigeons at Washington square were rather scrotty looking. I am amazed at their ability to survive . They will eat moldy old bread and drink from dirty puddles and yet, they manage to survive and have babies.
The pigeons at Salisbury beach are clean, well fed and colorful.
*more on this story on the next post
Posted by saint atlantis at 5:40 AM