for the love of basset hounds..or not 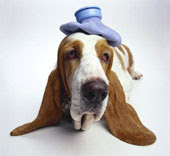 I've always loved animals ever since I was a little kid. However, my first experience dealing with dogs wasn't exactly love at first sight.
My mother always liked dogs. Matter of fact when I was about five years old my mother took in one of my Auntie Tillie's puppies. I just loved having my own dog. I didn't even want to go to kindergarten. I just wanted to stay home to play with "Lassie.
However, I seriously do not remember having Lassie very long. I just remember one september morning finding Lassie sitting in what looked like a huge plate of spaghetti. I just remember my mother's horrified expression on her face when I informed her that spaghetti was coming out of Lassie's bum and it was moving.
We later had a basset hound puppy for a short time as well who had this nasty habit of dining on the cat turds in the litter-box. He would then unceremoniously barf it up all over the wall-to-wall carpeting.
When I was about ten years old, all of us fifth graders were sent home from school midday for lunch break. My mother would send me over to her friend's house for lunch. Out of respect for my mother's dear old deceased friend I will refer to her as "JP". JP was a nice lady but she was not a house-keeper.
I would've rather had lunch at my own house. My mother would always have grilled cheese sandwiches and soup or cream cheese and jelly sandwiches with a ring ding cupcake for dessert.It remains unclear why I was sent over there. The usual fare was limberger sandwiches. I still have no idea what limberger is. It tasted OK but looked a bit unappealing all thick and beige with a few stray dog hairs stuck in it.
But that wasn't the bad part.
It was the smell of the house.
The family had a basset hound named "Noel".
The basement was a massive mine field full of dog shit.
I think cleaning up after the dog was one of the kid's jobs. Of course, no one ended up doing in.
Believe me when I tell you it was a smell you never forget.
I felt sorry for the poor dog but I was afraid to go near him.
During one of my stays at the house I was running around with the youngest daughter leaping from bedroom to bedroom over the open stairwell. She warned me what ever I do, do not to jump on her brother's bed. Of course, being the little brat that I was I did just that and landed flat on top of his blanket.
There I lay there frozen, in utter horror.
His blanket was scratchy and hard with what looked like various "jewels" sparkling in the sunlight.
His blanket was covered and I do mean covered with hundreds of dried up boogers in various stages of decay.
I screamed...
Needless to say I never did that again.
Over the years, my cousin Kim, who lived in what I thought was "the country" had all kinds of animals from rabbits, turtles, a pony and dogs. I spent a great deal of time with her sharing her love for animals. We were probably the only little girls on the planet that loved catching frogs.
She had all kinds of dogs with all their own stories and adventures.
It is amazing where life brings you.
Posted by saint atlantis at 11:36 AM