Day One..why I am here 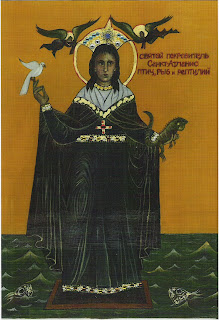 Everyone strives to be someone or something. Some of us achieve the title of doctor, captain or esquire and some ladies are satisfied with obtaining the the title of Mrs.
Some of us sort of struggle aimlessly with everyday stuff and then fall into our own identity purely by just being who we are and what we do.
I am Saint Atlantis, the patron saint of birds fish and reptiles (and all other critters as well)
Since the day I was born I've had a special affinity, respect and understanding of all creatures regardless of whether or not they are furry, scaly, cute or ugly.
I've started a pet care business about three years ago which has been fairly successful.
Sadly, during this three years I had to deal with some of customer's beloved pets passing away.
Some of these folks could barely talk because of the sadness they felt about their departed companions. Some expressed embarrassment and would start off excusing themselves by saying, "I know Fluffy was only a cat..." "I can't believe how attached I was to Peanut.." "I know this sounds silly but, Goldy the fish seemed to recognize me.."
My mother had a cocker spaniel that lived til he was about 18 years old. When "Tony" died, she was inconsolable. It was almost like she felt guilty or embarrassed that she felt so much saddness for losing Tony.I let her know it was OK to feel sad and that he was a family member. Oh poor old Tony but he was a very well cared for dog. He got the best food. He went to the groomer routinely as well as the vet. As he aged he had the worst gas issue on the planet but we tolerated the stink excusing it like you would an old gross guy.
All because these creatures are not human does not make them less of a being. They are nonjudgemental companions and family members. They are special in their own way.
However,I get annoyed when people say things like ,"Fido is just like a boy in a furry jacket", as if this is a compliment to the dog. A dog is a dog and there is nothing wrong with being a dog. I mean, dogs lick themselves and eat rabbit poop. I do not know of any human that does that. On the other flip of the coin, there are humans that kidnap and sexually molest children. There is no other animal on the planet that does that. That is way more nastier than eating rabbit poop.
The purpose of this blog is the celebrate animals in our lives. This includes all critters not just dogs and cats.
Posted by saint atlantis at 7:06 AM