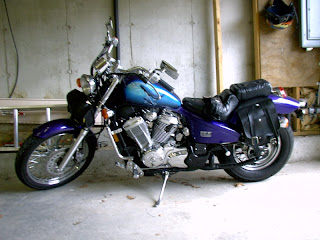 The other day I was watching the Olympic women's skiing event. Lindsey Vonn was the American favorite. She is the epitome of American perfection. She is drop dead gorgeous, confident, a super sonic athlete and daring. As I was watching her ski down this icy obnxiously steep curvy run I was getting sick. She had to be flying down this windy shoot at least 90 MPH. If she hit a divot or her skis crossed she would end up like a bug that hit a windshield. My heart was pumping reminscing how petrified I am of fast speeds. She made it down skillfully with an a guardian angel on her shoulder and winning a gold medal.
Thirteen years ago I participated in a motorcycle ride that involved going on rte 95. I don't do highways on my motorcycle. I drive like "granny" on the side roads. Some how I was convinced by one of the participants of the event that the highway would be shut down just for the motorcycles only for this event. However, I couldn't imagine that the highway would be shut down in the middle of the summer for a few hours just for this event but I did it anyways.
I should have trusted my instincts...
Not only was the highway clogged with motorcycles but with impatient vacationers in their cars trying to pass and dodge the bikes. As you know you have to go at least 65 MPH to keep up with traffic. As my bike's speedometer reached 65MPH I could barely hold on. With the passing cars, the gusting wind and my bike vibrating like a jack hammer my 106 lb frame could barely hold on. I started getting that cold clammy feeling as if I was going to pass out. I had to pull over fast before I indeed passed out.
I pulled over to the shoulder of the highway shaking, frozen and nauseous. As I was trying to shake it off a group of big scary bikers pulled up behind me.
The first thing that went through my mind was, " oh shit"...
These guys were big and scary. One them was this huge black guy with a bald head. He made Mr. T look like a peanut. His pal looked like Hulk Hogan. Mr T asked me what was happening. I could barely speak. I told him I was frozen because of all the crazy (car) drivers and could not get back on my bike. He said, "no problem..those drivers are $%^&ing @$$holes. Don't worry, just get the *&^% back on your bike".
In which I did.
There was a team of six bikes. They formed a "V" formation on the highway with me in the middle protected from any cars. As long as I stayed straight in the middle at the speed of 65MPH I was OK. It was like a choreographed ballet with me as the star. I would've guessed it by seeing this in a aerial view it must have looked pretty cool. I made it back to Medford in one peice.
It turned out these big scary bikers were police officers of the "blue knights" bike club. They were pretty cool guys. That day, I had a guardian angel on my shoulder.
I will write more on guardian angels later.
Posted by saint atlantis at 5:41 AM