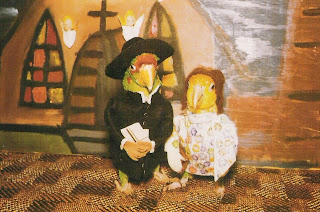 Do you ever have those moments when you stop and say, "thank God".
Every night I say that and count my blessings when I just step out of a nice hot bath and get into my clean comfortable bed. I kiss my sweetie pie husband on the cheek and think,"how did I get so lucky?"
Life wasn't always like this. But it certainly wasn't half as bad as lot of people.
I think about how it must suck to be a woman living in Afghanistan or finding yourself under rubble after an earthquake or to be some poor forgotten soul stuck in the nursing home at the mercy of their caretakers.
Yesterday we got a weather alert about a "wind advisory". We get alot of those due to the fact that I live by the ocean. The wind was blowing SW then NE then flipped to SE. The wind shot from an "advisory" to a category 2 hurricane (wind speeds reaching close to 70MPH) in a matter of a few hours. I've been through hurricane Gloria and hurricane Bob. They were really nothing compared to this.
The lights began flickering and the house was shaking like mad. I was debating whether or not to grab all the birds and head for the basement. After a few hours, it seemed to calm down. I thought for sure my awning was ripped off and there would be trees all over the place in the yard.
I had no damage and I did not lose electricity.
I thought to myself, "thank God".
People around me weren't so lucky.
I would say about 60% of the houses on the beach lost part of their roofs, chunks of siding and most everyone lost their fences. As i write this most still do not have power.There was severe flooding to add to the mix as well.It was difficult getting around since most roads were closed due to flooding, trees down and downed wires. One house down the street had it's entire roof blown off and landed on it's car squishing it.
I had customers to care for that day since their owners were away on vacation. The temps had not dropped below freezing so at least that was a help.
One customer had three big trees fall on her driveway but thankfully no damage to her house. One customer had a relative come and get their dog so it would'nt have to stay in a cold house.
My phone was ringing off the hook with customers asking me if I had electricity and if they could bring their birds over since they had no power.
By the end of the day my entire kitchen and dining room was filled with bird cages.
I would have to then take my phone calls upstairs since all the birds were making racket bidding for my attention. It was getting rather comical every time the phone rang. "Yes we have power. Come on over. We are having a parrot party!"
The birds love it at my house. They get fresh dandelion greens as a treat and they love to watch "wheel of fortune".
This was another one of those "thank God' days....

*photo credit: "Mrs. Ballard's Parrots" by Arne Svenson
(the Vicar and his wife)
Posted by saint atlantis at 4:36 PM