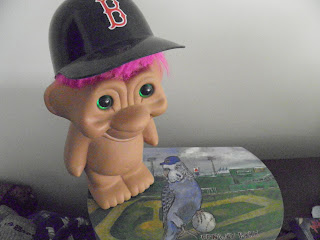 My cousin was mentioning how Robert Deniro reminded her of my father.
I paused for a minute and thought, 'yeah, he did  remind me of Deniro". They are both tough guys with this certain edge to them.
Sadly, he's not like that now.
The Parkingson Disease has all but crippled him. He can barely get out of bed. My mother now has a therapist come to the house to help him with simple tasks. What is worse than the physical atrophy is the dementia.I will not go into detail about this but it is terrible.
My long time girl-friend went through the same thing with her father. Both men were very similar in background (both working class Italians with head-strong personalities) I would talk to her about personal and irrational behaviors that my father would do and she would shrug her shoulders in a matter-of-fact way and say, 'oh yeah, my dad did the same thing".
There would be times you would have a nice normal conversation with him and then like a flip of a switch, you could see the change in his coloring and expression on his face that something shut down. He would fight you on anything and everything. Christmas day, it took the three of us to get him out of the car and into his wheelchair with the yelling and swearing. With all that fight in him he looked so small and fragile in the wheelchair.  And then I thought of Mr Emerson.
As I mentioned in previous posts, as a high school kid  I worked in a nursing home to pay for Community College.
Mr Emerson was a patient in the nursing home.
He was the big honcho of the (then) famous Emerson carpet company. He must have been wealthy because he was one of few residents in the nursing home that had a private room. .Many times I would find him asleep leaning to the side in his wheelchair.It was difficult to move him even though his musculature had atrophied making him very small, his arms and legs were extremely rigid.
At the time I just thought of Mr Emerson as just a sweet little old man.He would sing funny little songs. I wonder what he was like in his heyday as a successful businessman. He must have been commanding and impressive.
I try to remember my father the way he was in his heyday as the tough guy, the wise guy.
.
Posted by saint atlantis at 3:36 PM