still sticking to "the program" 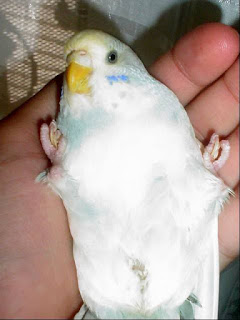 * I found this photo on the internet of an obese budgie

Occasionally I fall off "the weight watchers wagon" but after sticking to the main premise of their "life style' change after two and a half years I've pretty much stayed on course.
I think for the most part, I've gotten over the insane sugar/junk food cravings. I eat the same amount of food but it is usually a bucket full of veggies instead of cookies or something junky.
I was at a very la de da party at the top of the hub recently. By 7:30pm I was pretty hungry. They had buffet stations that offered different food items.
For the most part, there was nothing I could eat. They had pork dumplings, lobster ravolis, a beef carving station and other things that were loaded with cream sauces.
I tend to stay away from salad bars  in these open settings as well. I've seen people pick the veggies up, sniff them and put them back in the bowl as well as sneeze close to the open bowl.
It's nasty.
The only thing I found remotely edible was grilled root vegetables.
I placed five carrots on my plate plus a dinner roll.
I was horrified when one guy next to me in line said to me, "hey save some carrots for the rest of us!"
I was mortified.
I ignored him and walked away. Seriously, give me a F*&^ing break!
On Thanksgiving morning my 12 year old budgie Whook looked really bad. I really thought this was it for him.I thought by the time I came home from my parent's house Whook  would've passed on to budgie heaven.
To my delight,he was still hanging in there. He hadn't touched his seed but when I sat down to eat a warm plate of broccoli for my bed-time snack he scooted over to the side of cage looking at me.
I cooked up some instant rice and mixed some broccoli in it. He gobbled it down. I was kind of shocked to see him eat like that because like I said he looked like he was on death's doorstep. He hadn't eaten anything for two days.
He survived the next day.
That morning, I cooked him up more rice with cooked carrots. He ate that as well. He just refused to eat the parakeet seeds.
At this point, I was cooking rice and veggies for the other birds as well in addition to their regular seed/pellets.Oddly, if I just place the rice and veggies in their cage they will not touch it unless I sit down and eat with them.For the most part, rice and veggies is my main staple.
So it looks like the birds want to be on "the program" as well. It's healthy for all of us.
As of today, December 13th Whook is still with us.
He is still weak but he still has a good appetite -for veggies and rice.

Posted by saint atlantis at 7:19 AM