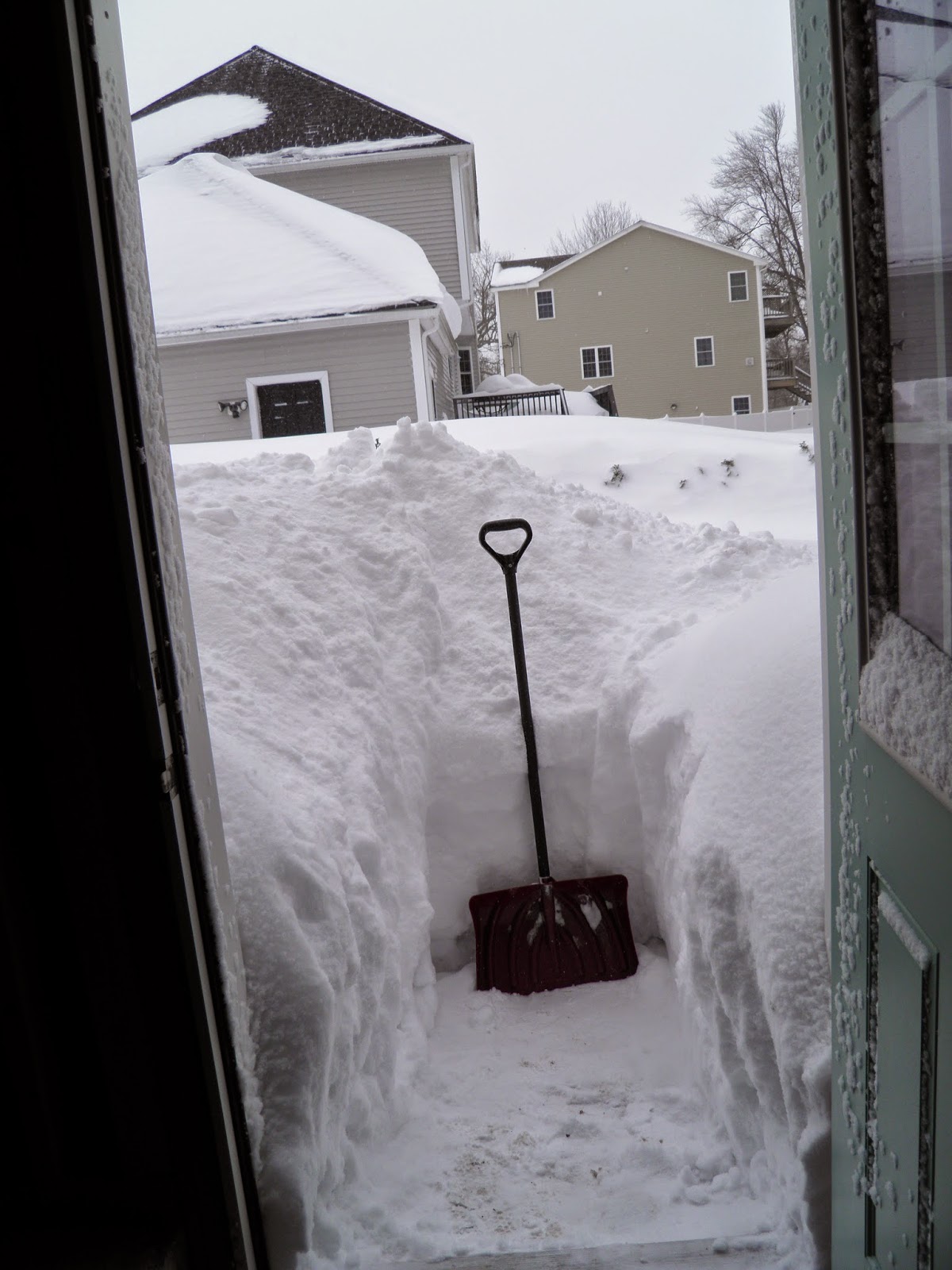 Welcome to 2015 snowagedon.
We got another 3 inches of snow on thursday which was considered a 'dusting' on top of the 6 feet of snow we already had and then, saturday night we got a major bollocking of snow with hurricane winds.
The news said we got 18 -20 inches but WE (in Salisbury) got at least 24 inches of snow. We, at the sea coast got bonked.
*In the above photo, is a shot from the side door entry.
As I said, there was at least 24(maybe more) inches of snow on top of all the other snow there as well.
I go out this way to clear off the back deck so I can feed the birds. As I was stepping on top of the old/new snow I waded in snow up to my waist until I hit a sink hole and fell in a soft spot up to my neck.
The wind was whipping and my head was only sticking out of the hole. Thankfully I was holding my shovel and dug myself out. The outside birds, I think, were grateful for the seeds since it is apparent we were "the only restaurant in town open". I had at least ten bright red cardinals swinging on the feeders. 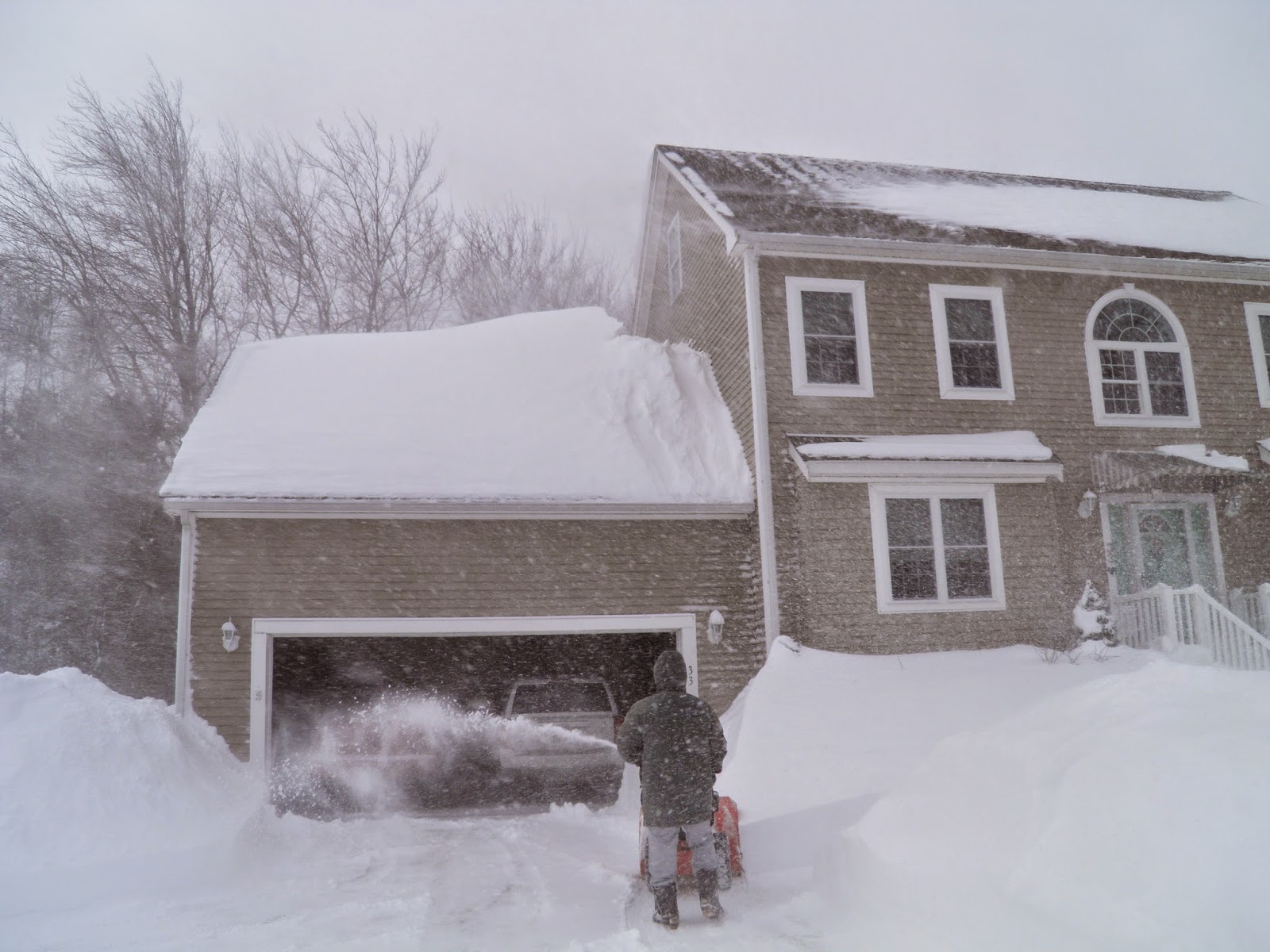 My husband is in charge of using the snow blower and I, unfortunately,  am in charge of the f***ing shoveling of entry ways, walk ways, vents, and back deck. I have been shoveling nonstop twice a day everyday for over three weeks plus I do the same for my Mother. Argh...
I did see a funny photo post on the news. There was a pic of a snow shovel with a sign on it that said "free personal trainer".
Isn't that the truth.
I haven't been jogging for close to three weeks. All I do is shovel and carry snow. It is like I am imprisoned in a Siberian labor camp. 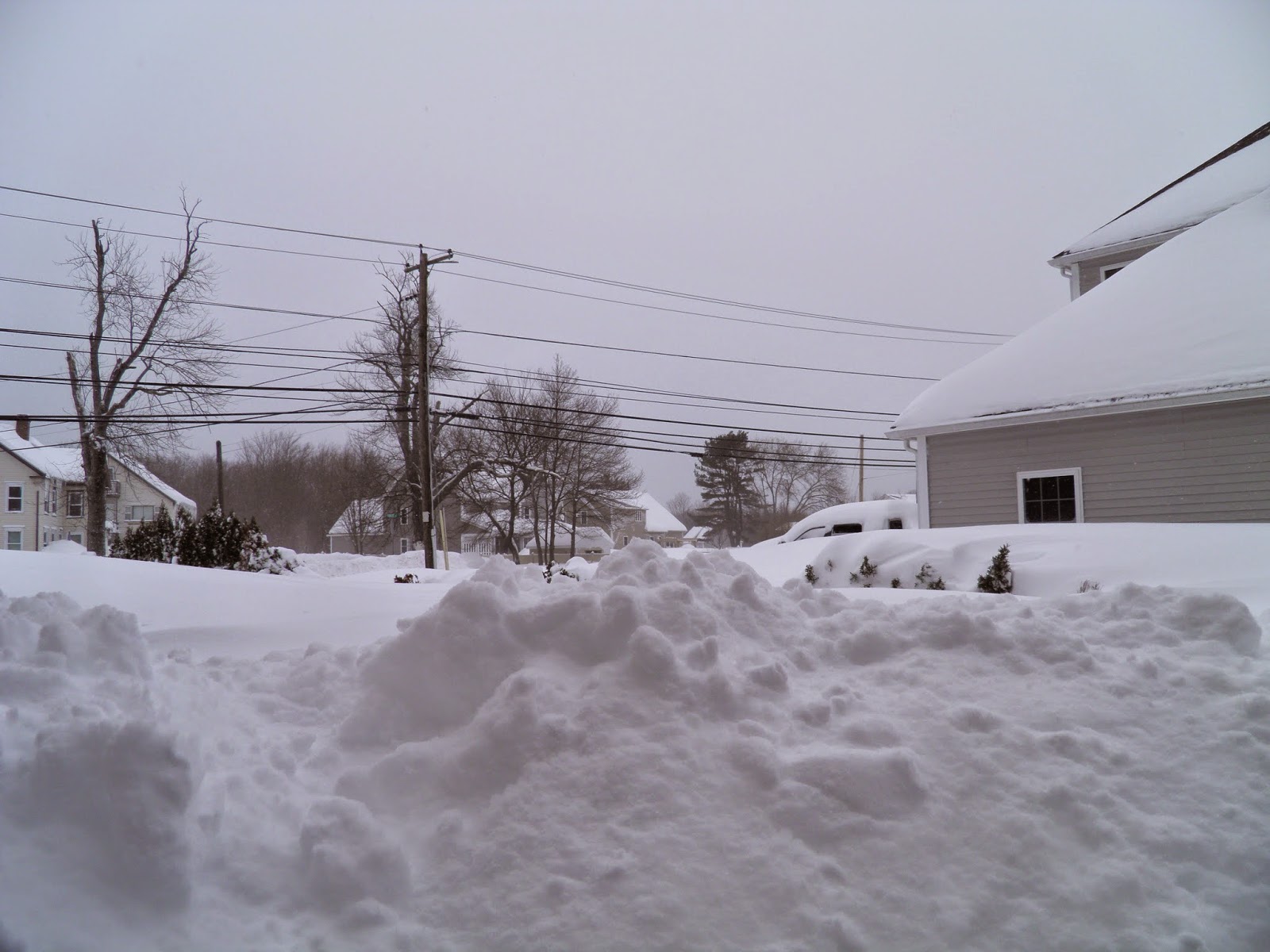 I do not know if you can even see the tiny tips of our 6-8 foot trees. You can see it barely by the building's black window. Here is my husband as the sexy male model posing at the freshly cleared walkway. As you can see there is no place to chuck the snow. Look how high the banks are getting. 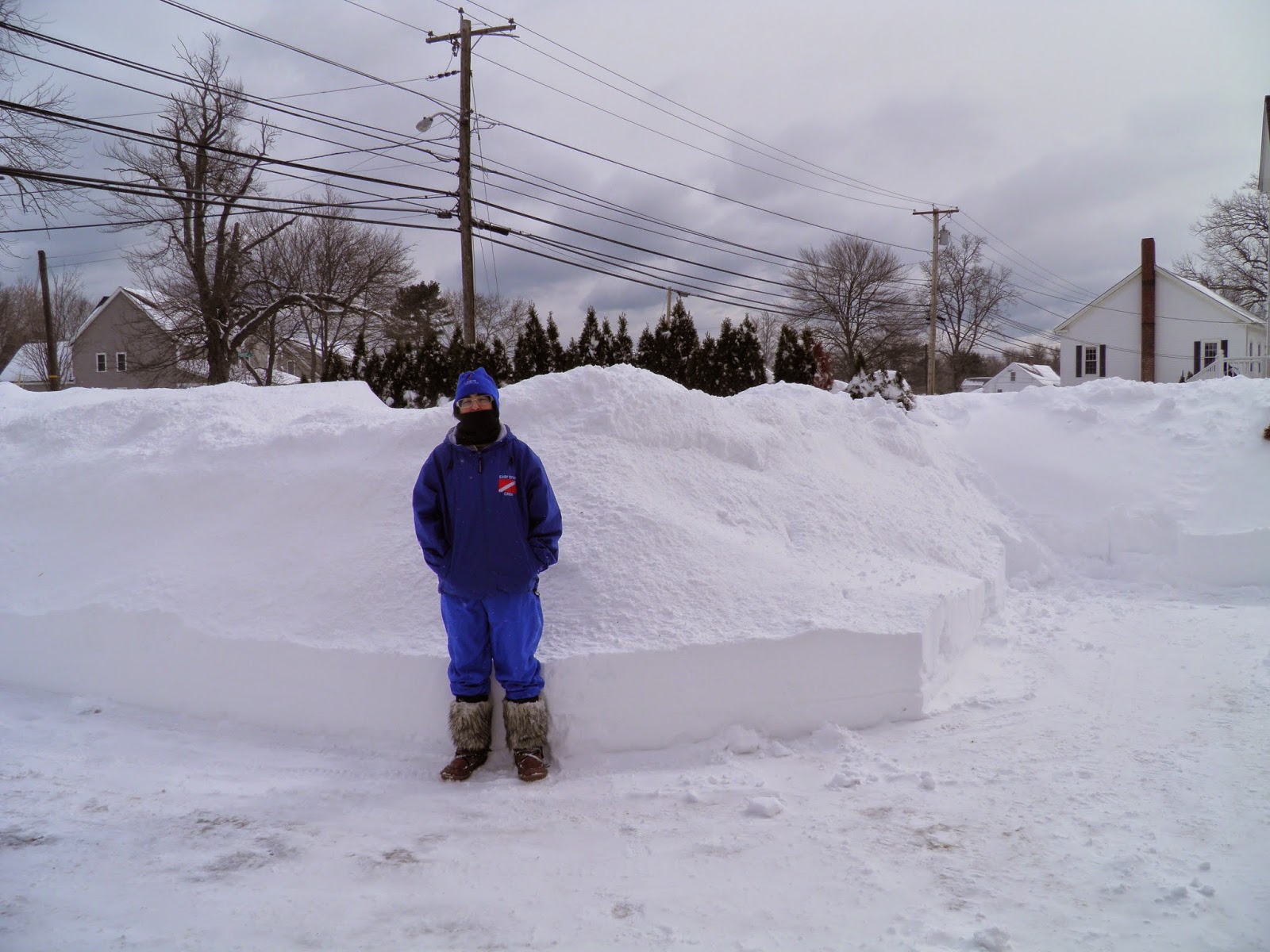 Here I am posing as another sexy runway model next to where the driveway that has been snow-blowed. Mind you the temp is -2F not including the wind factor. 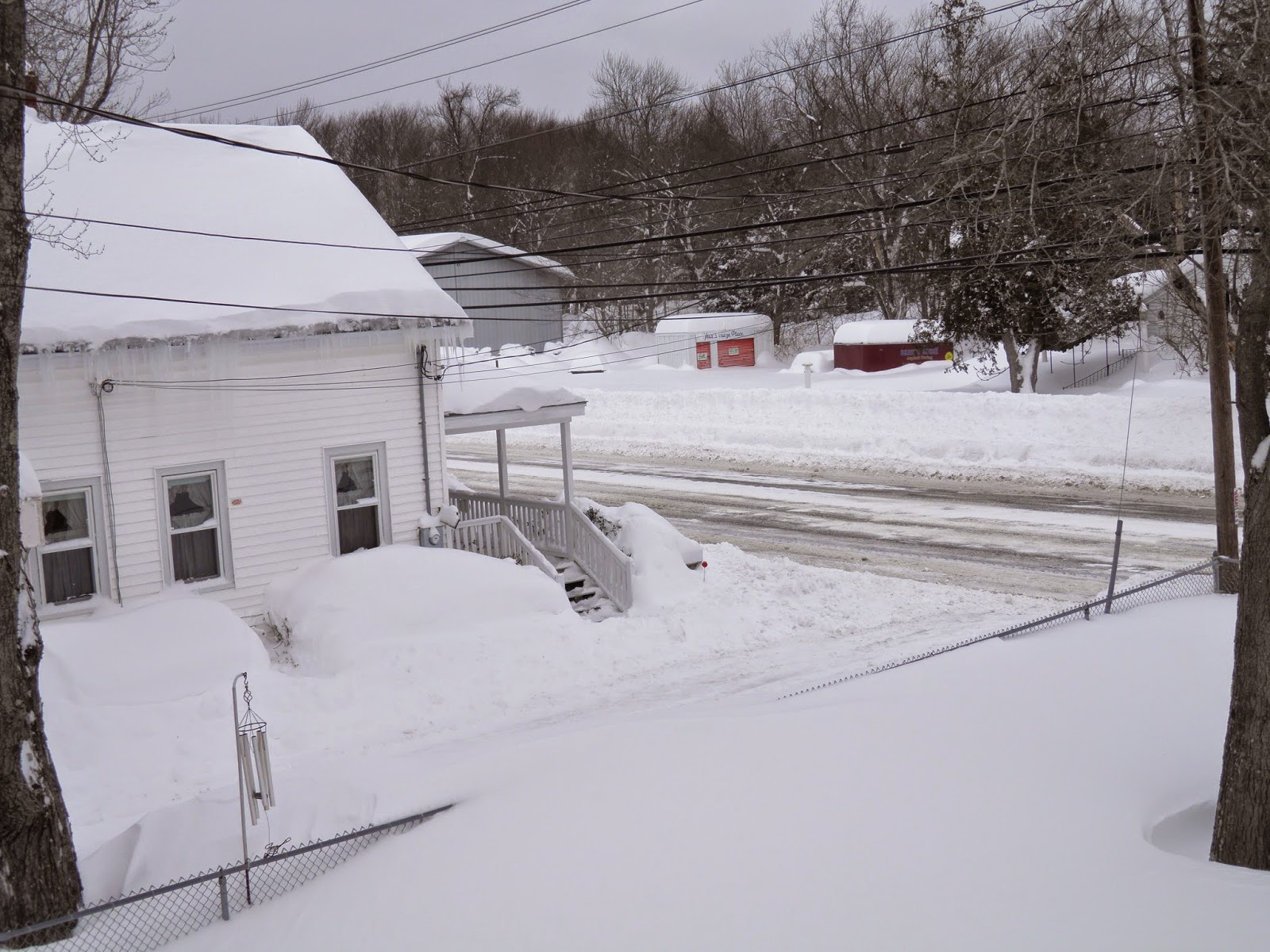 This is my neighbour’s house. The 6 foot fence is disappearing. Here is my husband in snow-blowing action. I took this photo while sitting on top of my roof trying to push the gigantic ridges off.
It was a bloody avalanche when I pushed it off. My husband first made an attempt to remove the snow off the roof  but he got stuck and couldn't get down. The wind was whipping and he was completely covered in snow. He's not very flexible so he couldn't position himself so therefore he was stuck.
Thank God for my work outs in cell block 9.
I pulled him out (he weighs the same as me) and then I got out there . I had no problem pulling myself in and out the top window. With that being said, I tried to just focus on pushing the massive ridges off while shimmering across the peak. I kept saying to myself, "don't look down..don't look down". I made the mistake of watching the snow tumbling down and got sick. I closed my eyes and shimmied back.
We were literally out all day digging, carrying snow and repeating the process over and over.
When I finally came in the house I thought, can this get any worse?
When I turned on the kitchen facet to get a glass a water I then realized it definitely can get worse.
No water came out of the faucet.
F***!
A water main broke on our street and because of all the snow the DPW couldn't find the break. No water.
The stores, of course, were all closed because of the storm but luckily I had some bottled water for drinking and I brought in buckets of snow to melt on the stove to use as wash water. I felt like I was living on Walton's mountain hauling buckets and buckets of snow in to boil on a stove pot. It was amazing how much snow I had to bring in just to make a gallon of water. I would say at least 6 good size buckets full.
And yes, it is getting worse, since friday, at least in this area, the gas stations are running out of gas. And they do not know when they can get a delivery.
This situation is a thousand times worse than the blizzard of 78.
The blizzard of 78 was a sissy storm..
Posted by saint atlantis at 8:09 AM