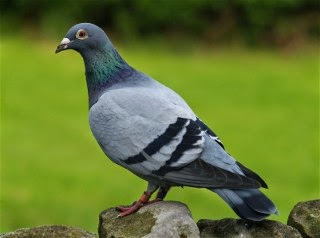 It's painful to go to the beach now that I can not feed the pigeons. All the tourists have gone so therefore, the supply of pizza crusts, french fries etc.. are far and few between. It's been a few months since I've fed the pigeons but they still recognize me. I don't dare feed them not because of the stupid law but because of what could happen to the pigeons as backlash.
A month ago, the wall above Sal's pizza collapsed due to rot and rain damage. The ledge below had two nests with babies in it. The area where the wall collapsed was taped and fenced off. There was rubble and debris in bins.
The nests were gone.
But what happened to the babies? I was freaking out thinking they were chucked in a bin but I couldn't get in to check. I am hoping they were old enough to fledge.
To keep the pigeons off the ledges, fake owls were installed to scare them off.
I really hope no harm was deliberately done to the pigeons.
I don't think people realize that there is a Massachusetts law that protects pigeon nests:  Mass law Part IV, Title 1, chapter 266, Section 132-"Whoever willfully kills pigeons upon, or frightens them from beds which have been made for the purpase of taking them in nets, by any methods, within one hundred rods of the same, except on land lawfully occupied by himself, shall be punished by imprisonment for not more than one month or by a fine of not more than twenty dollars, and shall also be liable for the actual damages to the owner or occupant of such beds".
There are less pigeons by the beach now that I have noticed. I am sure by the winter there will be even less of them.
Meanwhile, even though there is a leash law and a "no dogs on the beach" law  I've seen more dogs on the beach along with dog shit on the beach and sidewalks more than ever. I spoke to a young woman who had her dog run amock in August on a crowded beach. Her dog took a crap  next to somebodies beach towel and  she just left it! When I said something to her she just flipped me off. The lifeguards had no authority to do anything.
I guess" the laws" only apply to just a few of us.

Posted by saint atlantis at 2:19 PM