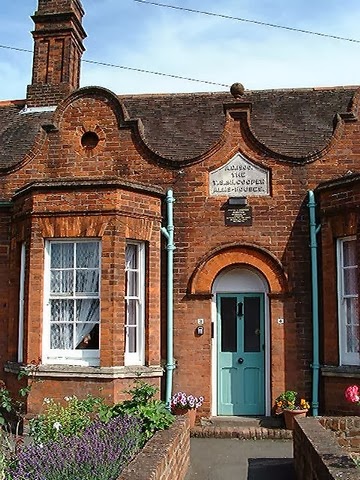 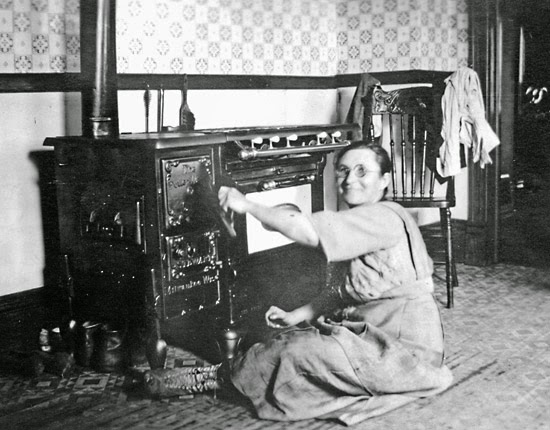 I had rented a PBS DVD about a "reality show experiment" on a family re-living life in 1900 in England.
The producers of the show picked a "rising middle class" flat complex like the one featured above and they completely restored it to it's original 1900 interior.
The apartment featured was exactly like the one  my sister lived  in Tooting, England. As I was watching this show I was jettison back in the hot tub time machine to 1900 to where my sister used to live in her rundown, rat infested, 1900's flat  in a scroggy part of London.
In the show, the producers struggled with restoring the apartment in order to make it authentic but also fitting it  to today's safety standard codes. In the 1900's, The wallpaper had arsenic in it. The paint was loaded with lead. The lighting throughput the house was "gas lights" which had to restored and retro fitted so that it did not cause a fire/explosion or leak CO.
My sister's flat still had the "original" wall paper on it but it was brown, flaking and torn. No doubt it was still loaded with toxins.Other rooms were painted over and over. A lot of paint was peeling and chipped. Some of walls had holes in it where you could see the horse hair plaster. This is where the rodents came in.The elaborate wood work was broken and chipped, and painted over in clumpy layers.The floor and tiles were covered over with what was a 1950-60's (I think at one time) a orange colored shag rug. It was completely disgusting. I refused to walk barefoot on this nasty stained rug.You could see underneath in spots remains of old broken tile.
The 1900's kitchen consisted of a iron stove. The iron stove was the most important element of the house which you had to tend to constantly because not only did you cook with it but it heated the house and heated the limited hot water supply. On the TV show, they had to retro fit the stove to make it "safe' because they could not use standard coal to fire it because of today's pollution standards. Also,these old stoves  tended to explode and had problems leaking CO. My sister's house did not have this type of stove but she did have a small fickle gas stove that was put in during the 1950-60's.The original wall boarding and area where the old iron stove was still evident.
The kitchen was tiny and she only had room for a tiny dorm room refrigerator. It was placed where a 1900's ice box was there before.I think the sink was also an original. It was a deep painted iron sink that took forever to get water out from the faucet.As you might guess life for women who tended to their homes was pretty shitty.
My sister's life in this flat  wasn't easy either. There just wasn't any modern conveniences like we have standard in most of our homes.
On the TV show the 1900 house's bathroom and toilet were separate. They had a claw foot tub upstairs with no toilet. Hot water was iffy if the stove wasn't heated up for hours. The toilet was a "water closet" with a upper chain pull flushing system. This room had no sink and it was situated outside next to the house.
In my sister's flat, she also had the original "water closet "with the upper chin pull toilet. There was no sink either. The "water closet" was connected to the house by makeshift plywood walkway.The floors were squishy from the rotten wood. The bathroom upstairs was no better. It still had the original tub. I'm guessing again, that the sink and toilet in the upstairs bathroom was installed during the 50-60's(maybe even earlier). The floor around the toilet was soft and it smelled like piss.
Electricity  in her place was iffy. You had to use a "key" for certain outlets to work. I think it would be safe to assume the electrical wiring was not up to "code". This flat would be an electrician's nightmare.
It was horribly cold and damp too.I went to bed with 5 layers of smelly quilts (Washing clothes was limited.Her washing machine was a tiny college dorm type of efficiency. It was the kind that you can only wash one pair of jeans at a time. And off course, she had no dryer) When I woke up in the morning my nightly glass of water I keep by the bed side had a skim of ice on it because it was friggin' cold.
In the TV show they managed to find many of the grand antiques consisting of furniture and details to decorate the house.I find a lot of those items art worthy and beautiful.
In my sister's flat an old couch was left there from the previous owners. I do not know how old it was but it was the most disgusting thing you can imagine. It had holes on it, the springs were broken and when you sat on it giant plumes of dusts billowed from it.I have no idea what color it was because it was so filthy. I told her to get rid of it for health reasons but her stupid (ex)husband "liked it".
I do, however, believe if that flat was restored (maybe original tiles, grand wood work and the hidden stair cases refurbished) and modern amenities updated it could be a beautiful place to live in with bits of history saved.
I did the find the TV show fascinating and interesting looking back on life in 1900. As beautiful as the clothes, manners and decorating was back then I am soooooooo glad I live in this century.
Thank you very much but I HAD a taste of life in 1900 when I stayed in Tooting.Bec!
Posted by saint atlantis at 7:07 AM