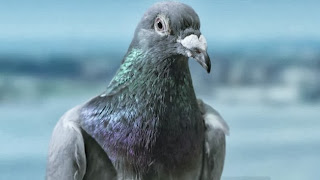 I'm back.
I haven't written in a while not because I didn't have anything to write about but instead, it seems like, I had so many things to write about.
I chose to just lay low since it hurts to much to sit here and type.
Two weeks ago, I found another baby pigeon at the beach that was in distress. The poor little thing was injured and hungry. He ran over to me squeaking!.  (Hungry young pigeons will do this).
His wing was broken and his foot was messed up. I took him home, sprayed him with lice spray and gave him some seeds. He was able to eat but was in dire need of help. I contacted Jody from the wildlife rescue (again).
It turned out he did have a broken wing.She treated him for worms and trich as well. In addition, she hand fed him to build up his strength. It seems like this "thing of finding injured/abandoned youngsters" may be a continuing issue.. I need to learn quick on how to care for them. I also need to learn how to successfully  ensure a proper way of their release so that are welcomed back into a flock. The other little youngster I brought over to Jody's is doing well and thriving.. In the meantime, I am working on my own personal healing process as well.
I was at the doctor's yesterday to evaluate my foot and neck from MRI results. And yes, There is an degenerative issue with my neck. My foot has severe nerve damage as well.So I am just dealing with it.One thing at a time.
Two days ago I saw this jetblue airline commercial starring pigeons.
It's really a good ad. It's definitely my favorite.
I have to tell you though, those pigeons in the ad are not 'street pigeons".
They are (OK laugh) "professionals".Those are homer pigeons. I can tell by their body shape and necks.
I actually wrote to jetblue letting them know I like their ad. I guess I am one of the few people that would appreciate an ad with pigeons in it.
Posted by saint atlantis at 8:58 AM