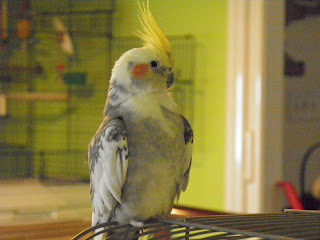 Last weekend I found blood on the floor. I thought one of the birds must have broke a blood feather perhaps flying into something. I checked all the usual suspects and couldn't find the source. Meanwhile Charlie and Patches (gay bird couple) had been vigorously "feeding" each other. I didn't think too much about it.
The next day, I found more blood in the same area near Patches cage. I noticed Patches hadn't been touching his food. The blood had to be coming from Patches. He didn't break a feather so it had to be coming from his mouth or bum. Needless to say I took him to the vet.
He wasn't eating or pooping. Anything he tried to eat he threw up. He was dehydrated and weak. Something was wrong. He spent the day at vet in ICU. The blood tests showed 'something" but was inconclusive. He did have a bacterial infection but something else was going on. He was prescribed baytril for the infection and metacam for inflammation. I was hoping the next day I would see some improvement but he kept throwing up and not eating.
The next day we got a "jackpot" of snow localized to our region. Everywhere else got a few little inches but we got at least 7 inches of heavy wet shit snow.
I panic every time it snows. I have this fear of being buried alive in it.
I hate the shit. I hate the winter.I don't think it's "pretty". I hate stupid fucking snowmen motif. I got up at 5:00am shoveled, snow-blowed, and pick axed the snow and ice for two fucking solid hours. And thank God I did and cleared the driveway because when I got the birds up for their morning routine Patches was not doing well at all.
I called the vet and thankfully because of the snow they had cancellations and told me to come right down. So I bundled Patches up and drove through the snow to the vet's office 20 miles away. They did more tests checking for possible lead poisoning and an x-ray. They tube fed him and put him on oxygen. The tube feeding forced him to poop and they found he had avian gastric yeast. It's a nasty fungus and difficult to detect.
The medicine to treat it is specialized so I had to go to the only compounding pharmacy in the area over in Beverly another 20 miles away. I was still cursing the friggin' snow even though it had stopped....briefly. I got Patches his meds: Amphotericin. This is the same pharmacy I got my pigeon's specialized meds as well .He has to take this medicine for a month (along with the baytril for two weeks) and I have to pick up his second dose of amphotericin in two weeks because since it is a compounded med which becomes unstable after two weeks.
Ah! The things I do for my birds!
Well after his initial dose, he started to pick at his food. No vomiting. The next day, he ate more, pooped and called out  to Charlie. I feel confident that he is on the road to recovery.
I am worried about Charlie since Patches had been "feeding" him. (It is form of affection when they barf up food into your mouth ) Charlie will go to the vet next week for check up to make sure he doesn't have the same illness. I will have to keep them in separate cages as well.
I just feel relieved (and grateful)that the vet found Patches' source of illness.
Posted by saint atlantis at 6:00 PM