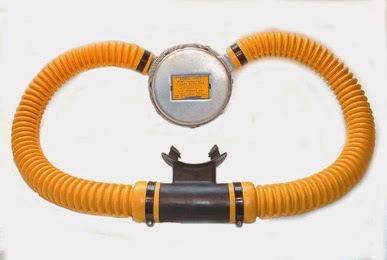 June 13 2014 Dive # 919
It turned out to be a perfect summer day. Last weekend was a 'bust' due to hurricane Arthur messing things up. Water currents, murkiness and wind were still a factor in where we would anchor so we ended up at Folly cove.
I am perfectly happy there. Chris and Fred were running the show with Pete and Andy. On board we had Alan H, Bob, John (from the "froggies". I mentioned in the last dive blog he was from metrowest. My mistake) and Ilya. I wore my wetsuit this time and wanted to check my weights and make sure my right ear would clear.  I also wanted to make sure the anchor was secure. Fred had other plans for me.
The water was really really murky-maybe 5 foot viz. As you descended it got clearer but OMFG it was wicked cold. Although, I must say that the cold water felt good on my head. The migraines and fibromyglia had it's steel claws in me.
Dive #920
I got back in the water with Chris as she filmed me donned in 1950's style scuba equipment.This was Fred's plan for his next film adventure. I had on old style black rubber fins. They were actually pretty comfortable even through I wore just neoprene socks with them.
I had the backpack style tank holder. No BCD. I used a double hosed regulator for the first time.
The damn thing tasted awful. I think in the mouth piece there was a couple of decades worth of chitin shells from various insects.
It was not smooth breathing like my sherwood regulator (which may be also considered an antique)but it served it's purpose. I can see why one would find these double hose regulator useful in taking UW photographs because the bubbles are behind you!
Dive#921
I had a little air left so I hopped back in the water to actually look for some fish.
After I got back on the boat and took my suit off Andy declared he seen a shark!
So you know what that means boys and girls.
We got to get backin the water at the same place next weekend!
Whoo!
Posted by saint atlantis at 5:02 PM