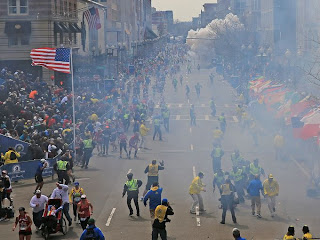 Yesterday seemed like a normal "nice" day.
It's a Massachusetts holiday :"Patriot's day".
There's a big parade in Lexington where at the crack of dawn there is a the "shot heard 'round the world" of the American revolutionary war re-enactment. As a kid, my friend Sue and I would go to Lexington for the parade and re-enactment. I've always been an American revolution enthusiast.
The Boston marathon would go on as well. It has of course, changed over the years. It was mostly locals running the race without a big money prize. Now, it has become a big international event with Kenyan runners winning usually procuring the big money prize at the end.
Locals of course, still compete as well trying to beat their own race timing scores.Lots of people also run as a part of special interest fund-raisers or for some cause or memorial. I ran a relay as a part of a memorial in the 1980's. I ran six of the 26.5 miles. I still run just about every day  for about 1.5 miles but I think snails, turtles and old guys with walkers could beat me.
It is way too crowded for me to get involved with anything to do with marathons these days between spectators, numbered runners and everyone else running to be a apart of the event.My pal Sue usually goes in town to watch the race with some of her pals as an excuse for a social get together in Boston.Lots of people like to do that for fun.
Yesterday, she was sick and didn't venture in.
I walked Mattie, had a vet visit, attended my birds and did errands yesterday listening to my spanish learning language tapes in my car.
I was clueless to what events had happened in Boston at about 3:00pm-until later on in the evening.
I put on the news as I was doing my usual evening routine of cleaning up the birds and giving them their supper.I saw something about "security" at Logan airport and then I saw the images of the explosions at the finish line near the spectator bleachers.
What the F*&^!!!!!
A couple of people were killed and over a hundred people injured from bomb detonations.
A terrorist attack?
We are still waiting to hear the details of the "who and why" involved.
This is terrible....
Posted by saint atlantis at 6:47 AM