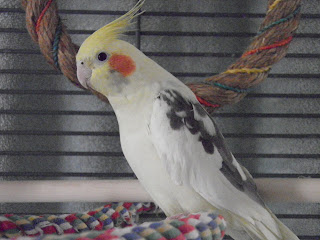 Oh boy Charlie is a feisty boy!
When Patches calms down then Charlie starts up!
OMG!
At 6:30pm forget about talking on the phone with all the racket they make.
The both of them get going and then Linus and Louie will join in on the "chorus"(plus I have Dover visiting us as well).
Do you notice how it's all the "boys" that cause trouble, eh?!
Charlie has been on SMZ antibiotics for a week now.Yesterday, I brought a poop sample from Charlie to the vet to see if his bacterial infection has dissipated but unfortunately he still had "rods" in his droppings. It is most likely e.coli. in his system that he got from drinking in a puddle so he remains on the antibiotics for a little longer and he still has to be quarantined from the other birds.
Meanwhile, yesterday was a nice sunny spring day. I opened the french doors to get some fresh air and sunshine in the room. The pigeon walked over to the screened-in area. He plopped on the floor, laying on his side like a drunken sailor enjoying the warm sunshine
.I should have taken a photo of him. He looked hilarious. I've never seen a bird lay on their side before .
He looked up at me as if to say,"ahhhhhhh! This is the life!"
Charlie still doesn't know what to do with fresh veggies or rice. He'll eat seeds and pellets but not fresh food. He will learn once I bring him in with the other birds when he sees them eating it.
It's crazy in this house right now!
Posted by saint atlantis at 12:26 PM