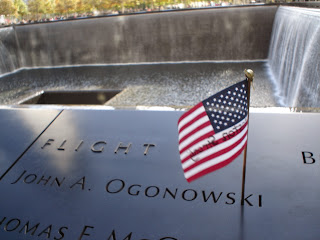 *I took this photo at the memorial.
I placed at flag with "Boston strong" on it for flight 77 at the pilot John Ogonowski's engraving.*

I made reservations (online) to visit the 9/11 memorial during my visit to NYC. There were hundreds, perhaps thousands of people waiting in line to view the sight.
As I walked down the financial district to the memorial I couldn't help imagine what took place that September 11th morning at 7:00am.  It was a cool sunny blue sky day just like the morning of that tragic event.. People were hustling and carrying on to get to work, grab a cup of coffee or to hail a cab.
My shoes were covered with grey dust. I am wondering if this is still the same dust that has remained from twelve years earlier.
The memorial consisted of two large "pools' with a waterfall that fell deeper inside the pool. The walls surrounding the pools were embossed of the names of victims from the flights, the pentagon, the twin towers, the first responders and also from the world trade center. People were allowed to place flowers on the names. I think I was the only one (at least on that day) that brought a flag.
I placed a flag with "Boston strong" on it that I had brought from home for flight 77. As I walked away, my husband said to me, 'LOOK!".I turned around and saw a bunch of people gathered at where I placed the flag and started to take photos.
It was very emotional.
I looked for the name of father Mychel Judge. He was the firefighter's chaplain.He was a Franciscan priest. He was one of the first responders to the sight and he had perished.
Prior to visiting NYC, I had watched a DVD : "the saint of 9/11". This was the story of father Judge. He was a true Franciscan. He reached out to the poor, the homeless, and gays with AIDS.
I wished I had met him.
After we left there I went to the churches of Saint Paul and Trinity church. They had special displays commemorating the victims of 9/11. I went to the church's gift shop with the intent of finding a saint Francis medal .Instead, I bought a small cross necklace.
However this cross was 'different".
The story goes after the tower's devastation two girders fell away and serendipitous landed on each other making a cross in the rubble.The cross I bought was a image of the two girders.I spent some time chatting with the saleslady about this story.
This trip to NYC to visit the memorial was on my "bucket list"
.It was very special
Posted by saint atlantis at 4:28 PM