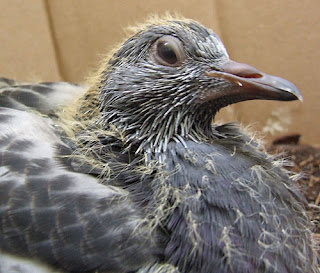 We are back from vacation.
We did our usual early morning pigeon feeding on the beach. I noticed a youngster huddled over near a corner. People were walking their dogs and I felt for sure this baby would get killed. I saw retahded guy deliberately let his dog go at the flock. I stood by the baby to protect him and just gave jerko the ol' stink eye.
I had my husband pull some chairs over by the neighboring bar so he could stand on it to place the baby back on the ledge where I presumed he fell off of. We watched for a few minutes to make sure the parents would feed him.
Instead they both viciously attacked him and tossed him off the ledge.
I was horrified.
This pigeon was not even a fledgling. He was only about 3 weeks old with fuzz still on him. I had no choice but to take him home. The poor little thing was covered with lice and mites. I was then covered with the creepy crawlies as well. I brought him in the basement because I did not want to infect my other birds and sprayed him down with bird lice spray. The creepie crawlies were falling off in mounds. It was disgusting.
I placed him in an aquarium lined with a towel. I tried feeding kaytee baby parrot formula (a warm slurry mix) in a washed out medicine bottle with a rubber cover with a small hole opening for him to stick his beak in. I sat there for a good hour and tried again a few hours later and again. I think he drink a little of the solution but not enough to nourish him.I tried mixing the slurry with seed to see if he would respond to that but he only gulped a tiny bit. I offered him a bowl of water and which he sucked up. I laid some  seeds at the bottom of aquarium to see if he was old enough to forage but no luck there. He was pooping only scant amounts which made me worried.
The next morning I thought I would bring him back to the ledge but at a different side closer to where I found him hoping the parents would welcome him.Sadly, this set of parents did the same thing. They attacked him and tossed him off the ledge. Again, I brought him home hoping he would eat.
I contacted pigeon.biz and Jodi from Cape Ann wildlife rescue to ask what I need to do to help this bird.
The folks at pigeon biz said it would be difficult to release the pigeon once he is old enough to fly because the other pigeons will not accept him in their flock plus he would be imprinted to me.
Jodi highly suggested I bring him to her rescue so she could check him out, "tube' feed him ( a long thin tube is inserted down his throat for gav feeding. Many vets do this) Plus she would release him with other rehab pigeons in her care as a flock when he was old enough and strong enough.
I thought about this and figured this would be the best choice. I was hoping I could do this on my own but this made better sense.
Despite of  a nonstop pounding migraine, I drove over to the Cape Ann wildlife rescue located near the marina.( I would drive by her place on my way to Easy Diver!)
Jodi was very nice and accommodating for the little pigeon. She inspected him and saw his keel was very pronounced. He was starving. Other than that he visually inspected OK. Most of the mites & lice were eliminated now.She would give him a dose of flagyl as a preventive just in case he had trichomonads which is common with pigeons. Under her care, she a couple of severely handicapped pigeons, a dove in recovery that was run over by a lawn mower, a white wedding dove and an injured hawk.
I scrubbed my house down just in case any creepie crawlies made their way on my floor or rugs.
I will keep in touch with Jodi to see how the little pigeon is doing.
Posted by saint atlantis at 8:43 AM